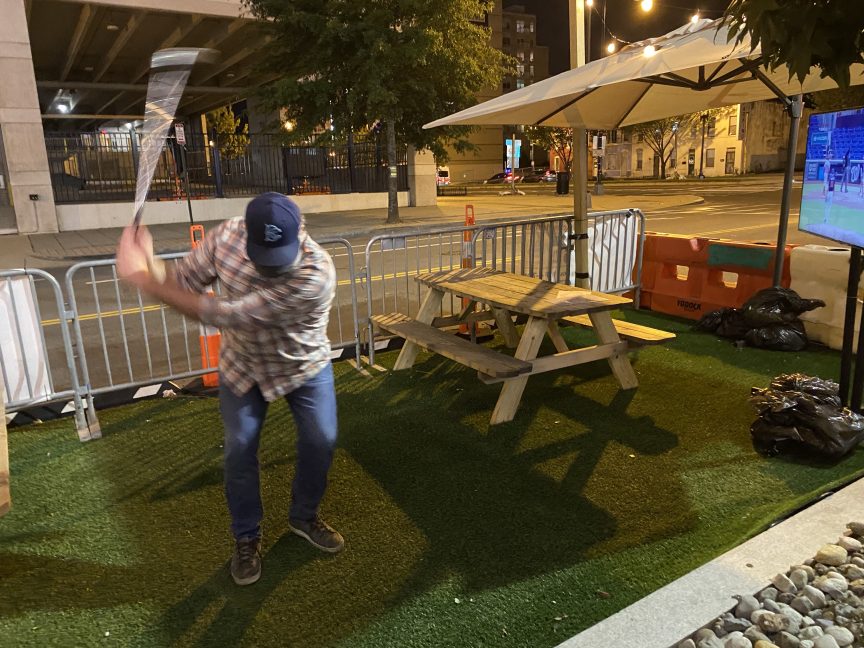 The Nationals were hosting the Braves, and although I couldn’t attend the game, been next door was the next best thing. The Braves were coming off the heels of the modern day NL record of 29 runs against the Marlins.

Baseball is not the same this year without fans. When I walked into Walters, I noticed that not a single TV was on the Nats game, despite it been on the 2nd inning. Instead, they were showing the Orioles post game news conference. I know it’s easy to lose track of time especially with the normal rush of fans trying to line up into the ballpark and the roar of fans as the starting lineup is announced. But Walter Johnson, the Senators pitcher and bar’s namesake would be rolling over in his grave right now.

The management quickly put the Nats on the 220 inch big screen and apologized.

No worries – the Nats were already up 2-0

I was just happy to make it by happy hour which ends at 7pm M-F. I ordered the Nanticoke Nectar IPA brewered locally in Cambridge, MD. It started out malty but then the hops took over – but not aggressive – a well made IPA.

The booths are spaced six feet apart and there are over 30 TVs which would easily accommodate every NFL game on Sunday. Walters is known for their self-pour draft beers but COVID customers were no longer allowed to pour from it. The utensils were sterilized and vacuumed sealed and the paper straws did not dissolve in the tongue.

“Excited about football starting back up?” I inquired.

“Oh yeah, we expect to be packed with 50 capacity that is.”

To reserve any of the five hightop-style tables, three indoor booths, or six outdoor “streetery” picnic tables, customers have to pay $100 per table, which will be deducted from their final tab. Reservations are recommended: https://www.eventbrite.com/e/nfl-week-1-tickets-119909834543

The only thing that would make this evening better would be a Nats victory. I walked out to the ballpark to catch the 9th inning. It was so surreal – I could hear the announcement and the roar of the crowd, but there was no one there. It was difficult to follow the game and the Braves tied it sending it to extra innings.

I walked back to Walters and could see customers on artificial grass nursing a beer while enjoying the game – either the Nats or NBA. Suddenly the Nationals scored a run in the bottom of the 12th – very people seemed to care – a big cry from last year when Nats fans far and wide were “Stayin’ in the Fight.’

And with that I walked away and towards my next destination – the new sports book at Capital One Arena.