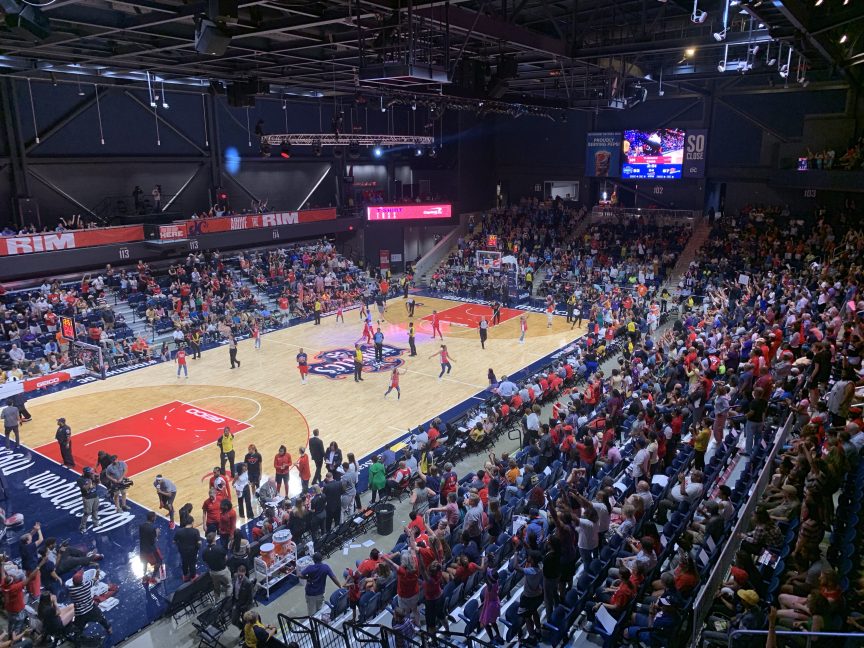 Seems out of place to be watching professional basketball in an arena the same size as some high school gyms. But after all, having the Mystics, the reigning Eastern Conference champions, play in my neck of the woods feels quite surreal.

Last year, they played across the River at the Capital One, sharing a home with the struggling Wizards. There they were easily overlooked and treated like the red headed stepchildren in the ever-growing Chinatown.

When they played just prior to the Capitals Stanley Cup Finals, admission was free of charge. There were many games in the NBA-size arena with a capacity of over 20,000 that looked sparse and poorly attended. Even G-Basketball teams attracted higher crowds.

The surging Mystics were preseason favorites for the WNBA championship and they certainly deserved their own home arena – one they could feel welcomed and respected, even if it was in up-and-coming Ward 8.

It’s the WNBA after all, probably the most disrespected professional sports league in the USA. But there’s no justification for this disdain – the Women play just as tough. There is significant talent on the roster that can play toe-to-toe with their male counterparts and stay neck to neck in the game. In fact the male practice squads lose to the women all the time, and they’ve learned to love it. The Women’s team is lively and a blast to watch and there’s more than a handful of superstars such as all-star Kristi Toliver and Natasha Cloud, the Mystics all-time assists leader, to command premium ticket prices.

St Elizabeths (St E’s) established by Congress as the Hospital for the Insane was opened in 1852 to provide care for the military and the mentally ill residents of D.C. During the Civil War, wounded soldiers who received psychiatric treatment were hesitant to admit that they were housed in an insane asylum, so they stated instead that they were put up in the luxurious 5-star resort in St Elizabeths.

But after the mid century with the advent of psychiatric drugs, many patients no longer needed to be confined for long periods of time. The far-reaching deinstitutionalization movement resulted in the shutting down of many psychiatric hospitals. Likewise, St E’s downsized to a 292 bed hospital. During this time, more than half of its patients are criminal defendants – the notorious John Hinkley spent 34 years here until his release in 2016.

It’s easy to see why there has long been a mental health stigma associated with the red-brick and limestone buildings that dot the 346 acre campus. Been a long-term Ward Eight resident, I’ve long admired the Italian Renaissance Revival style architecture with its ceramic tile roofs. The sun-filled rooms and spacious grounds created a relaxing place for the distressed to find peace and recover. Despite the ornate accommodations, patients generally did not readily improve, and the patient population ballooned to over 7,000 in the 1950’s.

But by the turn of this decade, things began to change. In 2013, the U.S. Coast Guard moved their headquarters to the west side of St E’s. Today, the government is drafting plans to move the Cybersecurity and Infrastructure Security Agency (CISA) to St. E’s. They plan to demolish five historic buildings and build three new ones with a 2026 completion deadline.

The sun is shining on Congress Heights with plans for a town square, affordable housing, office buildings and even a hotel – definitely a first for a neighborhood that has long been relegated as a food desert for many years.

What a perfect venue for the the Entertainment and Sports Arena bringing professional basketball, concerts and new life to the long-neglected Ward 8.

With only a seating capacity of 4,200, there are no bad seats in St E’s. And the way the Mystics have been playing, it’s easy to get a sell-out crowd. I wanted to support my community and it was imperative that I cheer on the surging Mystics, all while rallying for a brighter future for Ward 8.