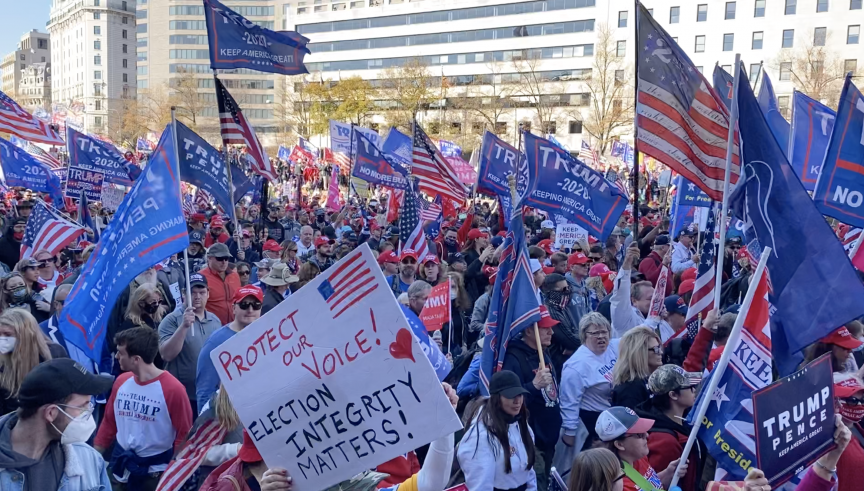 One week after the presidential election was called for Joe Biden by virtually all mainstream media, hundreds of thousands of President Trump supporters gathered in Washington, DC to protest the results.

Americans from every state and from a wide variety of ethnic and social groups came to voice their concerns of voter fraud and to express their hopes that Trump can achieve victory in the courthouse.

As I stood on Pennsylvania Avenue within earshot of the Freedom Plaza, I listened patiently to speaker after speaker state why Trump shouldn’t concede and why they feel confident that Trump can overturn the election and serve for four more years.

“I went to bed that night seeing a huge lead in Michigan, Wisconsin, Pennsylvania and Georgia, only to see it whittle down and get stolen by the news media,” cried an ardent Trump supporter.  Another Trumper with a megaphone then started a chant,  “CNN S*cks, Fox News S*cks.” This was followed by claims of illegal ballots and Dominion machines switching votes to Biden.

What a tall tale and crazy conspiracy theory, I thought. My initial impression was that these were all lying hypocritical egomaniacs. But then I decided to set aside all preconceived notions and just listen unconditionally to what they had to say.  And more importantly understand their true motivations and aspirations.

As I peered at each hopeful face that walked by me and pondered over their outlook, I began to feel an uncanny sense of connection.

Although, I did not believe in their plight, I saw many of my friends here, young and old, some raising signs, some chanting, all happy and hopeful that this “stolen” election would turn magically in their favor.

Actually, they would never be my friends – these were people who I’ve never seen and would likely never see again. But if I had met them in a grocery store, library or park across rural America, I would share a smile, happily introduce myself and hopefully make a new friend who I could embrace and respect, perhaps for life.

The issue weren’t the pro Trumpers – they are ordinary citizens who I believe care for the greater good of America. The issue is with their ruthless leader who is perilously playing them.

After clearly losing the election by at least 20 electoral votes, the president stubbornly refuses to concede – something Hillary Clinton, who lost by the same amount, did the very next day.

Trump and his closest aides, without question, knows that the election has been all but lost. Actually there is no evidence of widespread voter fraud and virtually no chance that a recount will overturn any results.  Republican leadership clearly knows this but, in the interest of the party’s future, they refuse to share the truth to their dear leader.

What is the repercussion of such spurious fundraising and false rhetoric?  For one, almost 100,000 people descended upon Washington, DC for a lost cause, fooled and patronized by the autocrat they foolishly adore.

The Proud Boys and other Far-Right hate groups also attended and there was violence and arrests involving Antifa and other opposition groups.

Not conceding also seriously affects Biden’s National Security transition. The future president should be getting top-level intelligence briefings by now and should be vetting and hiring staff that needs to be ready to lead  from day one. Trump surely was offered this opportunity by Obama, but he doesn’t play by the same rules.

The bipartisan 9/11 Commission stated that if there had been a longer transition and cooperation between Clinton and Bush, there might have been a better response, or maybe not even an attack.

Trump is definitely putting his interests above the safety and security of ordinary citizens  – many of whom MAGA marched to DC, many of whom I hope will soon realize that they were conned by a ruthless buffoon who doesn’t care a bit for any of them.