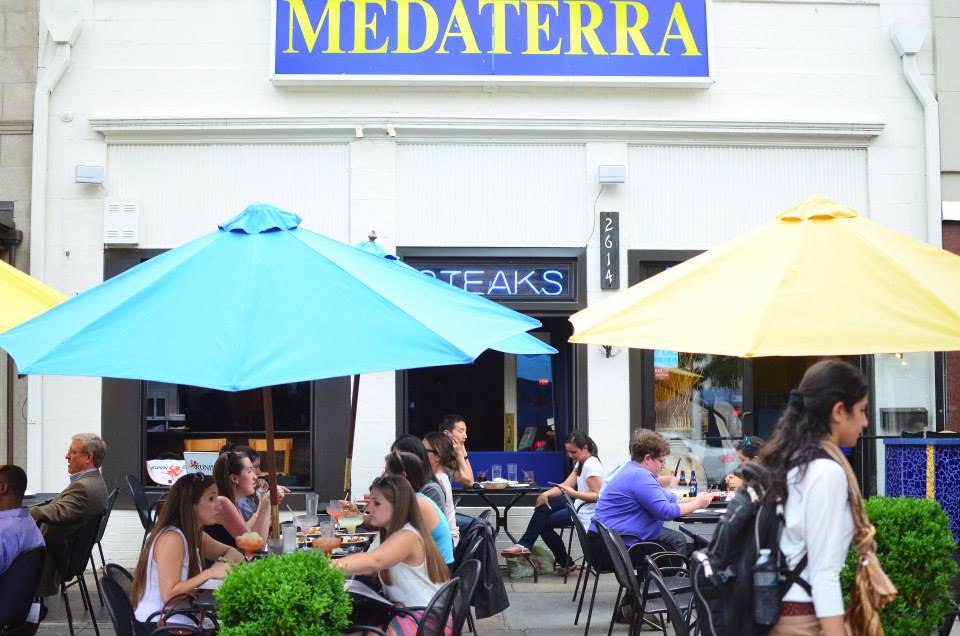 It was a beautiful, crisp evening in Woodley Park and the inviting blue and white facade of Medaterra Restaurant was a welcome sight after a mere one minute walk from the metro. We walked up to the mosaic-tiled hostess booth and were warmly greeted and brought to our outdoor, blue umbrella-covered table. We couldn’t help but immediately appreciate the lively, warm and casual atmosphere.
Our waitress brought our menus and listed their numerous, thirst-quenching drink specials, including $3 frozen margaritas and $5 sangria. Both of my friends ordered the raspberry and  strawberry frozen margaritas, respectively, and I ordered the red sangria. All three options were a delicious and refreshing start to our meal. The frozen margaritas are just the right amount of sweet and slushy and have a minimal amount of alcohol, but they give you a large portion. While I enjoyed the margarita’s, I fully believe that the drink to have at Medaterra is their delicious red sangria. So often, sangria is watery or relies on liquors for its flavor, but this sangria has a deeper, more complex flavor. Full of chopped apples and medium-bodied wine, I felt completely refreshed as I scanned their large menu for my meal selection.

Medaterra has options for everyone, from meat-lovers to vegans to the gluten-intolerant.The owner, Angela, was very hospitable and went out her way to help us select the best dishes. According to Angela, the best meals to try at Medaterra are absolutely any of their lamb dishes, the Seafood Pasta, Falafel, Hummus and Baklava. We promptly took her suggestions and ordered the Hummus and Falafel as appetizers.
While waiting for our appetizers to come out, I decided to take a stroll around the restaurant to see the interior. The inside of the restaurant is just as warm and inviting as the outside. The walls are covered in lively prints and painted with orange, yellow and blue paint. It has large windows that open onto the patio where there is outdoor seating. The numerous mirrors on the  interior reflect the light and cast a warm glow onto all of the tables. As I was walking inside, the staff was very attentive and helpful. I think that in order to support the casual atmosphere of outdoor section of the restaurant, staff often keep their distance. However, I do think that a slight increase in attentiveness would improve the service at Medaterra without detracting from its laid back feel.
After a few minutes of exploring, I returned to the table to find that our appetizers had just arrived. We were delighted by the two large falafel patties over a bed of lettuce and a generous serving of paprika-flecked Tahini. Each of the patties had a thin crust of chickpea flour and toasted sesame seeds and a creamy, herb-infused interior. They were perfectly complimented by the spicy, tangy Tahini. I will definitely be returning for their Falafel! Next, we tried the Hummus, which was also delicious and had a nice balance of Cumin, Coriander and Garlic. The pita bread was lightly toasted and thinner than usual. We would have preferred that there was more substance to the pita bread to support the hummus.
At this point, we were ready to select our entrees and we chose a lovely selection of the roman pizza with lamb, the spinach and cheese ravioli and the Mussels. As soon as they came out, we were delighted by mediterranean aromas of tomatoes, garlic, goat cheese and cumin.
The mussels were elegantly and generously plated in a cream-based tomato sauce and fresh herbs. While these mussels were tender and fresh enough to eat alone, the light sauce complemented their flavor.

The spinach and cheese ravioli were in the same light cream-based tomato sauce, which brightened the cheese and the spinach in each ravioli. Curiously, each ravioli contains either spinach or cheese, rather than a combination. We would have preferred that each ravioli contained a combination, but they were each flavorful and tender.
Finally, the roman pizza with slow-cooked lamb, roasted red peppers and goat cheese on a grilled pizza was mouthwateringly delicious. This was my first time having lamb pizza and it will certainly not be my last. The slow-cooked lamb was the most tender, flavorful lamb that I had in quite a while. It tasted of tomatoes, garlic, coriander and cumin and was generously laid on top of scoops of fresh goat cheese and roasted red peppers.

Although by this time we were already quite full, we could not pass up their baklava. It came to us rolled in a phyllo dough coil and lightly drizzled with honey and golden raisins. The style was new to us, as we were all used to seeing it layered and plated in a square. This rolled style leaves the phyllo dough crunchier and does not allow the honey to absorb quite as evenly. While we certainly enjoyed the Baklava, we all agreed that we do prefer when the honey has had more time to seep through the phyllo dough.

We all thoroughly enjoyed our time in the warm, casual atmosphere of Medaterra and will absolutely be returning for their Sangria, Lamb Roman Pizza, Falafel and generous hospitality.