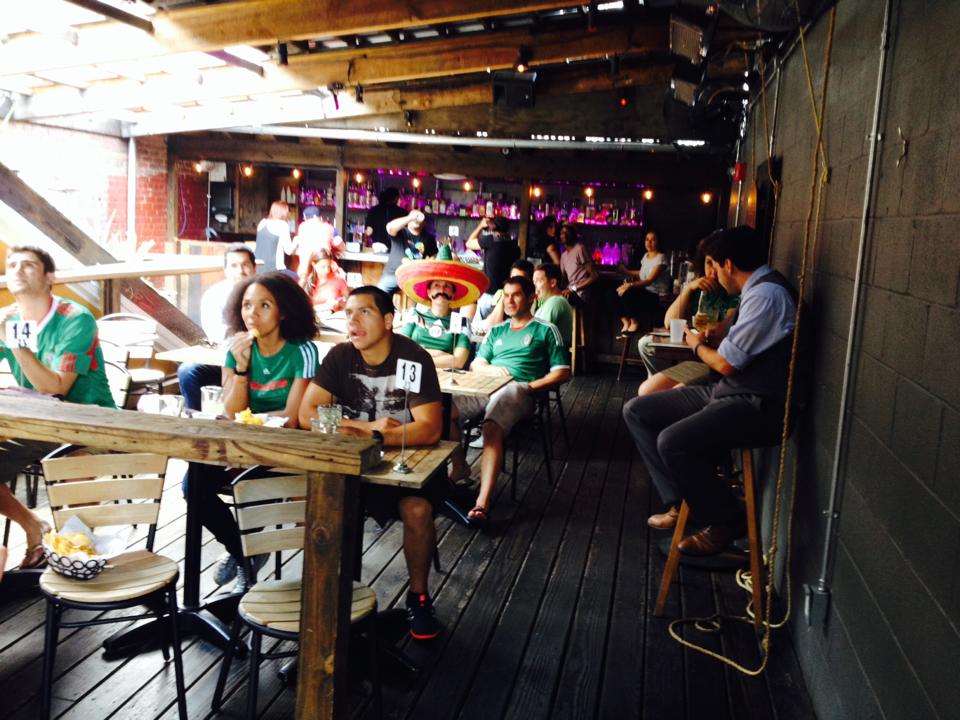 The decor was very rustic with lots of rich gnarled, and salvaged wood as well as metal tubs and spigots instead of sinks in the bathroom. Most interesting still is the fact that instead of a mirror between the male and female bathroom there is nothing but sinks. It took me a good moment to realize it was open to the other restroom and the look on an older gentleman when he saw me at the sink as he stepped into the men’s then thought “I must have entered the wrong door” was priceless. Aside from that the rest of the restaurant has that spartan look that is almost post-modern. I kind of liked it personally.

Upon sitting at my reserved table set away from the main floor on a raised level and under a skylight I was greeted by my nice waitress. She went ahead and explained the menu options  and added which were her favorites. Taking her advice I ordered the Shrimp Ceviche. I am a sucker for a ceviche, whatever seafood is used, so long as it is prepared right. And boy was El Centro’s done exceptionally well. But before I delve deep into that wondrous appetizer’s treasures, of which there are many by the way, I must speak about the complimentary tortilla chips and salsa the were offered to me.

The tortillas were served warm which I always find to be a nice touch. They had a good thickness and weren’t too flimsy. The salsa molcajete (pronounced mole-ka-hetay), which simply means it was made in a stone mortar and pestle, was zesty; however, I tasted a bit too much onion and far to little heat. It was a brownish salsa from the spice but was still fairly mild. After speaking with the one of the managers, Jordan, and explaining how I expected more kick from the salsa I was offered habanero and salsa Verde options for my chips. The salsa Verde was spicier to my delight and heavy on the tomatillo. This wonderful kin to the tomato has a bit more zip and tang to it which is invigorating. And the habanero sauce was Spicy! Jordan was right when he said it has a lingering effect. Involuntarily my eyes began to water, fortunately my margarita helped quell the flame somewhat. The habanero sauce is definitely NOT for the faint of heart. Speaking of my margarita, it was strong enough but not get-you-drunk-with-one-drink strong. I ordered mine on the rocks and with salt. It was delivered on the rocks but without salt. Oh well, an oversight I am sure and not a huge deal, the margarita still tasted good without it.

My first dish was brought out and was both beautiful, presented in a beautiful bouquet of vegetables, herbs and atop a chilled orangey margarita float. It had a small kick at the end which was pleasant and not overpowering to the mild shrimp. The whole dish was chilled in fact aside from the tortilla strips sprinkled on the top. The bite of crisp from the tortillas was good with the rest of the dish. Luckily no shards wedged in the roof of my mouth or between my teeth. The pico de gallo dollop in the middle was a good representation of what I look for in a pico, the bite of jalapeño with chopped onion, tomato and cilantro of course! The pico and shrimp together were excellent. Succulent and exploding with flavors that blended well. The shrimp was just done enough, not dry or rubbery at all. The avocado was ripe and a nice counterbalance to the heat from the jalapeño and spices. The overall bite had a sweetness underneath the hotness, from the margarita float. The slivers of jicama julienned was almost lost in the rest of the dish, in fact it wasn’t until several bites in that I remembered the plate even had jicama at all. Another root vegetable that Central and South American nations like to cook with, it has a lightly sweet and nutty flavor. This dish was my favorite of the evening by far. Beyond a doubt , this dish is a must try! And seeing as El Centro is offering their Restaurant week for two weeks instead of just one you have plenty of time to stop by and try it for yourself.

The main dish came out next and it was huge. First the plaintains, cousin to bananas, were sauteed but without any crisp which was nice as the inside is almost custard-like in its thick creamy texture. Plaintains offered a milder sweetness with less of the starchiness of a banana and are something everyone must try at least once. At the end they were sprinkled with a little salt that made a nice addition to the mildly sweet flavor. As for the Mahi Mahi was scrumptious. It is a firmer fish than some and so it can handle a little more cooking time, that being said it was not overcooked. The Veracruz topping of mixed green and red peppers in tomato sauce with pickled onion provided the zip that complemented the relatively mild Mahi Mahi very well. The side of goat cheese stuffed Anaheim Chile was a hearty and tasteful side. Though side might not be a good word for it as that one chile took up about half the plate. Anaheim Chile’s are pretty mild on the scale of peppers but with the pungent, and creamy goat cheese filling, and thick corn meal breading it was dipped in before being deep fried it was wonderful. I know I love a good strong cheese, especially in the copious quantities it was stuffed into the pepper. If you do as well I would recommend this entree to you.

The final course I picked was Flan, served with a strawberry and pineapple salsa on top. The flan was good and eggy as well as firm but still with a little bit of jiggle to it. Luckily for me, it was not caramelized until it tasted burnt as I have had before at other places. The pineapple had the texture of being jarred or canned in liquid. And strawberries were tangy and sweet having also been soaked in a sugar-water mixture. They could have been fresher to me. I am sure they have to make it in batches that probably sit for the day, or possibly two. Aside from the fruit topping not being fresh, the flan made up for it to me. It was the right consistency, flavor and sweetness.

After my dessert I spoke with the other manager, Jacob Ishler, who I found very receptive to my constructive criticisms. When I advised him on my perception of the fruit topping not being fresh her assured me strawberries had been purchased that day and soaked in house. He did concede that due to the high volume they had to buy large quantities to keep up with the orders. He also said as this is not an option they usually offer that they were still working to perfect it. My suggestion, which I thought of later, is to make smaller batches maybe right before the restaurant opens and once more later in the evening. Or perhaps pick fresher strawberries next time. One of those should do the trick.

Overall I was impressed both by the service, especially the attentiveness and humbleness of the managers, and the food. It was a big hit with me, well aside from the fruit topping and meek salsa. I give El Centro a solid B as they have a little room for improvement but still pass the grade for their enchanting mix of Hispanic cuisine, showcasing imaginatively unique recipes like the shrimp ceviche, and the little updates to traditional dishes such as Mahi Mahi Veracruz, which is usually made with Tilapia. Also of note, other than El Centro extending their Restaurant Week menu to two weeks, is that their restaurant week menu comes with a choice margarita, mojito, caparhina, corona, dos equis or dos equis lager, or any soda. They sure have all their bases covered at El Centro. Stop by this week, next week or any other time to try something with a bit of a twist on the usual Mexican fare.

Annamarialives in Alexandria, Virginia having recently moved to the DMV from Ohio, and you could say she is a jack of all trades. She critiques local food and drink, mystery shops, writes and creates her own gorgeous knitwear. In her spare time she can be found at the pool or visiting one of her favorite watering holes in NW D.C. Twitter.com/meinemaria