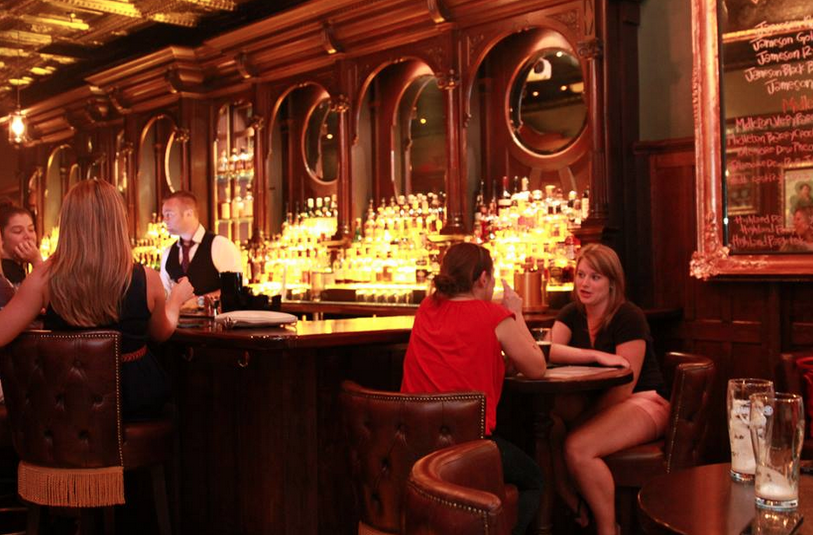 Ri Ra Georgetown is just as beautiful if not more so than Ri Ra in Clarendon. It is a bigger space right on M st near 31st. The chandelier at the Georgetown location were a particular favorite of mine. The seating was very comfortable seeing as all the chairs and booths were overstuffed leather. The rest of the decor were rich woods and lush reds. It definitely has a homey feel, well that is if you were lucky enough to be raised in a lavish turn of the century home. Having already reviewed the Ri Ra in Clarendon during a Food Crawl less than a week before, I was pleased to have some new food options. I visited during restaurant week and was very happy with the food, service and ambiance. The Restaurant week menu was prix fixe with no options. They simply had one menu for everyone. While generally I balk at not having choices, seeing as I can be picky, the representation of Irish food offered during Restaurant week was spot on. The appetizer was a traditional potato cake, which looked lovely upon arrival. It was served with a savory sour cream, and a balsamic reduction atop mixed greens. The potato was crunchy on the outside while soft inside. It had a bit too much char on it for my liking, but still tasted very delicious especially with the savory sour cream on top. The sour cream was scrumptious having been blended with chives and onions, and the drizzle of balsamic reduction was both lightly sweet and tangy. I have always been a fan of sour cream but this is the best I have ever had. It would be awesome with some potato chips to dip in it. Both the sour cream and glaze set off the potato cake exceptionally well. The bed of mixed greens consisted of red Boston lettuce, arugula and baby spinach. It was fresh with no wilting and a nice finishing touch. Aside from the crunchy bite on the outside it was a delightful dish. The entree was a very tasty Guinness BBQ Burger. The burger, ordered rare, arrived as ordered to my satisfaction. The Guinness BBQ sauce was smoky with a hint of a sweet finish and the bun was soft but did not fall apart. The melted cheese, and French fried onions paired well with the meat and BBQ sauce. It also came with lettuce and tomato placed under the meat in the bun instead of on top as I am accustomed to. Not a bad choice since the onions were on top. The accompanying skin-on fries were crunchy on the outside, but a few of the smaller fries were all crunch and had too much bite to them. They were however seasoned well both with salt and chopped herbs. While not the most spectacular fries I have ever had, they were not the worst either. The final course was an inexplicably wonderful mousse that I absolutely loved. The dessert, called the Trinity, was a Bailey’s chocolate mousse topped with Jameson whipped cream and Guinness chocolate sauce. Those Irish sure do love their alcohol, even in desserts. The whipped cream was fluffy and airy with just a hint of Jameson at the end. The chocolate sauce was rich and delicious and the mousse itself had a full flavor of Bailey’s blended into the thick, creamy and nicely smooth mousse. As a dessert it was superb and I will order this again assuming they have it on their regular menu. The entire dessert experience was so good I can only describe it as transcendent. So, despite a lack of options for the Restaurant week menu, I was impressed and plan to visit this establishment more frequently. From start to finish I was pleased as pie, with very few exceptions. My waitress was a pleasant Irish lady who was very amicable and chatty. Something I appreciated since the restaurant was fairly empty at the time of day I visited. I would rate this location and its food as a solid A and recommend anyone that is in the Georgetown area at least have one meal at Ri Ra Georgetown if they are in the mood for a beautiful, calming environment and yummy authentic Irish food.
More pics provided here