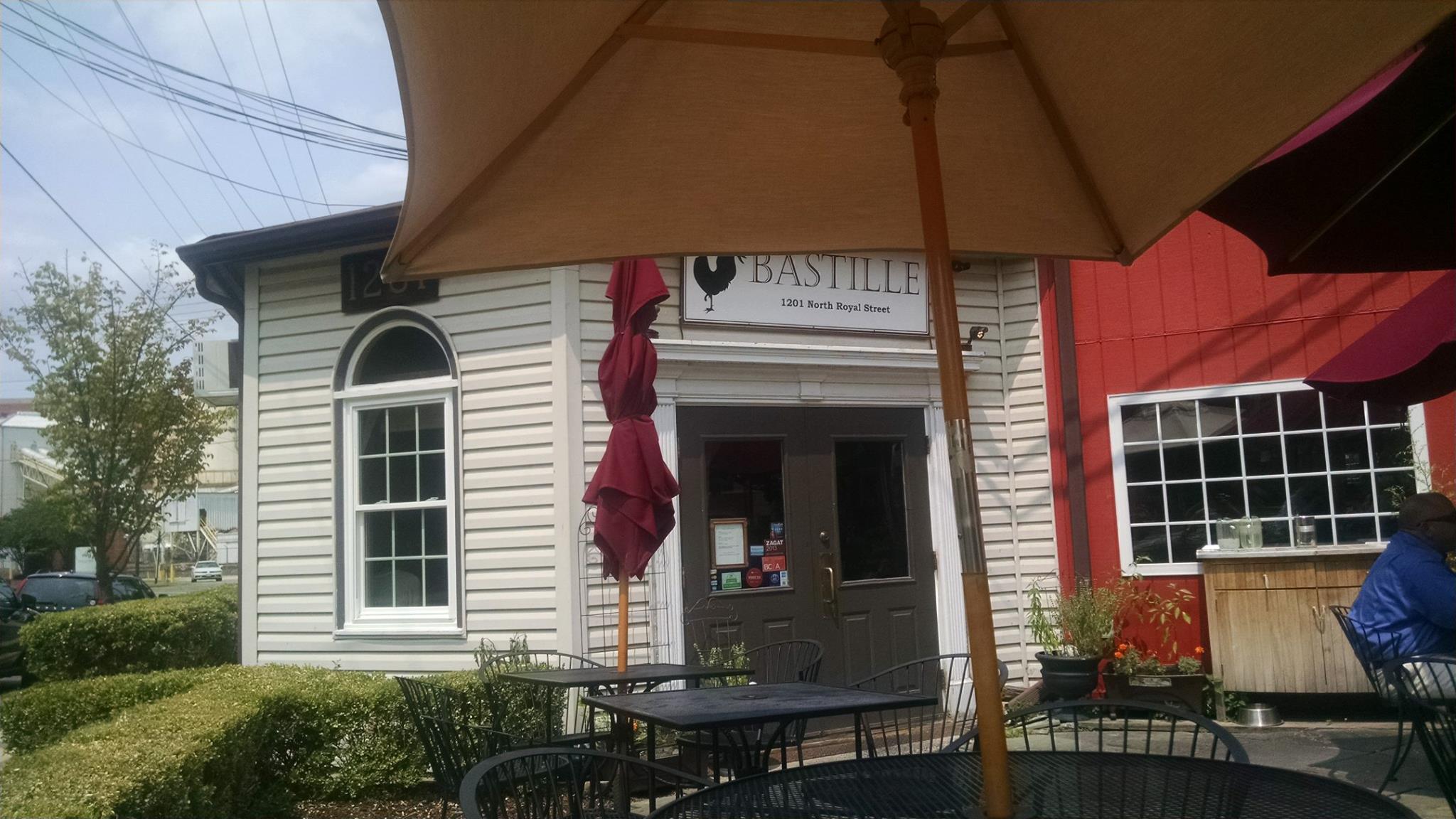 Located off the beaten path in Old Town Alexandria well past the hub of activity most enjoy about the area, Bastille Restaurant & Wine Bar is unassuming from the outside with a simple, classical elegance inside including a long wooden bar, heavy draperies and a cut-through showing the ongoings in the kitchen. The first thing I noticed about the lunch crowd was that is was dominated by aged yuppies. I swear there was no one under 30 there.   Here is hoping their happy hour brings in a younger crowd. As for the patio, seating is limited to ten tables and faces the vinyl siding of a home and patio furnishing store on one side and a boring part of Royal St. on the other. It is not lacking in a certain sense of charm with the large Magnolia tree on the edge of said patio and large umbrellas for shading. Unfortunately most of the charm ends with the decor. Bastille offers a prix fixe lunch special at $29 with a choice of appetizer, entree and dessert. The choices are varied enough to suit most tastes while mostly remaining true to the French-style cuisine. Though I arrived during the busier part of the afternoon I was still promptly seated outside. My waiter, an older gentleman with a thick French accent, and my water arrived within mere moments. So far so good. From there it is a mix of good, bad and bland. The good began with the complimentary slices of sourdough and plain baguette with soft butter. It was served in a cone which had old news articles about the Eiffel Tower printed on the paper cone. How quaint, and perfect for the crowd they were dealing with. Aside from presentation, I found the bread nicely chewy in the center with a good medium crisp to the crust. However, when I asked the waiter if the butter was Plugrá, which for some strange reason is what I expected, he somberly pointed out that Plugrá only has a French name but is not actually French. Well, isn’t that good to know for future reference?

Moving on I ordered café au lait to enjoy while waiting for my food, which is a good thing because it took what seemed like eons to come out. The coffee arrived in a metal urn alongside brown sugar cubes, milk in its own smaller urn and several packets of splenda. I don’t know why I should have been surprised by the lack of choices for sweetening my coffee, I mean it is a French restaurant after all, but it still struck me as odd. The coffee was strong yet flavorful just the way I enjoy it, and being able to add the perfect amount of sweet to my own tasting was a refreshing change from the typical coffeehouse fair.

Upon ordering my prix fixe of beignets of shrimp, corn and basil, served with rouille aioli; Grilled calamari, baby octopus, radicchio, fennel, artichokes, orange, piquillo coulis, fried capers, balsamic; and for dessert: Tarte au citron consisting of lemon curd, crisp meringue, and local raspberries. Asking my rather French waiter, by which I mean he came off slightly snobbish and refused to smile, what wine he would recommend with my meal, he suggested a Sancerre “La Craie” Sauvingnon Blanc. I must say that man knows his wine as it was an excellent accompaniment to each course of my meal. In all honesty, aside from the dessert, it was the best part of the entire experience.

The “beignets” arrived quickly enough to not make me wonder if they had gone to France to make them. As for being a beignet, it most assuredly was not. Upon arrival it looked more like a pile of slightly burnt corn fritters atop some orange colored sauce. The taste, texture and doneness of every single little bit of this dish was off, and by miles. I had high hopes still that the mixture on the inside would taste better than it looked. It did not, in fact it was horribly wrong. First it had a very spongy texture while the dough was gluey and in parts undercooked. The shrimp though, they did manage to overcook and make rubbery. The orange sauce, otherwise known as rouille aioli, was bitter and a bit bland. If you are not familiar with rouille don’t feel bad, neither was I. Traditionally it is a sauce served on top of bouillabaisse that is thick enough to keep the croutons from sinking. The base is chili pepper, garlic, olive oil and egg yolk with either bread and rock salt, or saffron. I must have had the saffron version because it was entirely too bland to have much if any salt in it and to my dismay I detected no hint of cayenne. Needless to say after picking at this dish for a couple minutes I abandoned it in hopes that my next course would make up for it. I assure you it did not.

As for the Grilled Octopus with radicchio, it failed epically. The very first indication is when my knife had trouble cutting through the calamari. This is always a bad sign the squid is very overcooked. I almost had to ask for a steak knife before I finally managed to saw through. Upon taking the first bite it immediately struck me how bland it was, on top of being extremely overdone, and it could not be rescued even with the accompanying coulis. Next were the capers which the chef crisped up. If you have never had capers served this way, it is no wonder, it does not work. Period. These pickled flower buds are far too delicate and small to panfry. The chef managed to make these normally tiny delights crunchy and bitter instead of light and piquant.

Next was the baby octopus which to my pleasant surprise were actually cooked just right. Sadly, they were also devoid of seasoning. The only real boldness to the dish was the fennel which I am not particularly fond of in the first place.

Luckily for me there was more fennel than anything else in the dish, well aside from the two large wilted radicchio. The radicchio was decent actually, nicely wilted on the outside and still crisp on the inside of the small heads of lettuce. It did not however make up for the rest of the dish. For French cuisine it had too many ingredients to begin with, in my opinion. In addition to the radicchio, fennel and capers there were threads of basil, pickled artichoke spears and mandarin orange slices.

The mandarin oranges I did not mind so much as they were juicy. Then again it is hard for them not to be when they clearly had been soaking in a can or maybe a glass jar if I was lucky. I am just curious how that can be a local product, seeing as their website claims the chefs creations “are sparked by the use of seasonal, locally sourced and farm fresh ingredients.” Sparked by perhaps, but including them I am not so sure.

The artichokes most likely were store bought as well, unless they found a local source for pickled artichokes. That being said, they were good. Tender all the way through even to the long stem that most cooks discard due to being too tough. I still would have preferred a freshly grilled or baked artichoke instead. Overall this was a losing dish. One bite of the baby octopus with the radicchio, basil and sauce was decent, but not spectacular. The rest was fair at best aside from the deplorably overcooked squid that is. After spending considerable time trying to work through this mediocre dish I gave up the ghost and sent it away. Luckily during my trek through the bleak entree I spotted what looked like the dessert I ordered at the next table and it looked fabulous. When I kindly asked if it was, the patron confirmed it was wonderful and that she even liked the meringue which she normally did not eat.

There is hope at the end of this dreary tunnel! With much anticipation, I waited for my own Tarte Au Citron to be delivered. Luckily I did not have to wait nearly as long as I did for my entree. And it was delightful! The tart was buttery and crisp but not burnt, and the raspberries ripe, a couple a touch too ripe even. The raspberry sauce was nicely sweet and not too tart, and the creme was smooth, creamy and lemony but not so much as to pucker your mouth. Last but far from the least, the meringue cookies were ever so slightly chewy, very light and literally melted in your mouth. It almost redeemed the rest of the experience for me. Almost. In fact, the dessert was so good I think they should change the restaurant into a patisserie as this clearly is the chef’s real talent.

All in all, I would definitely visit this establishment again for dessert and coffee perhaps after dinner some evening, but most assuredly not for their food or service.