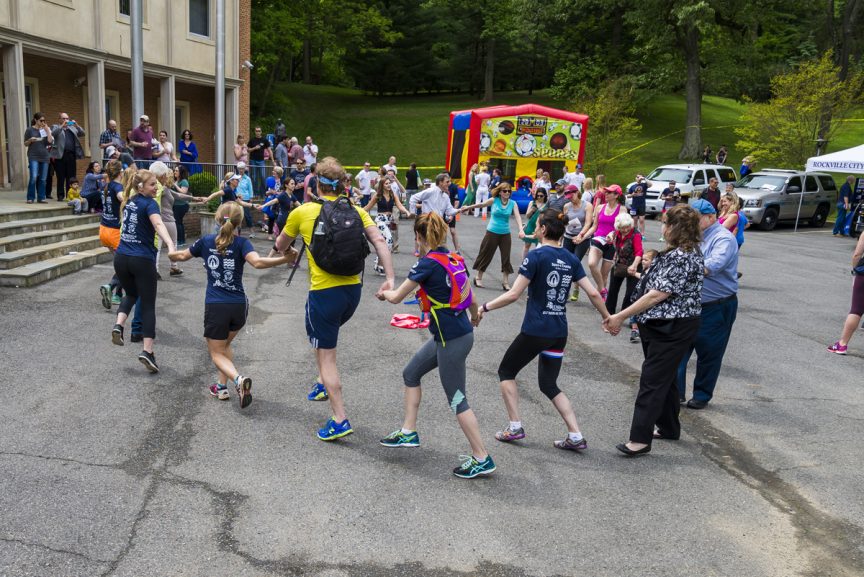 On Sat, May 14, the annual EU Embassy Run was held formally for only the fifth time, yet it was bigger and better than ever before.

Doubling the numbers from the year prior, over 120 runners and volunteers gathered in front of Van Ness/UDC Metro station to embark on a trek across Europe (by way of DC) 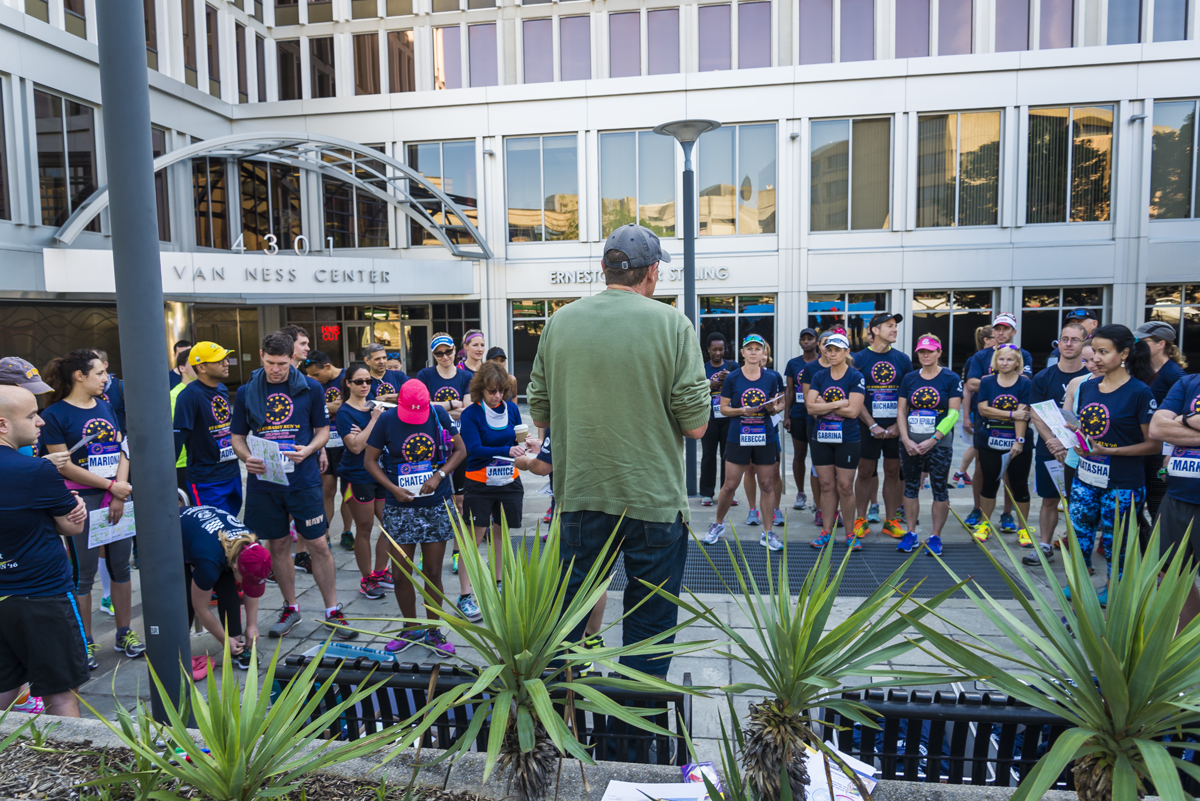 This was no easy task – most of these embassies were scattered all over the city. 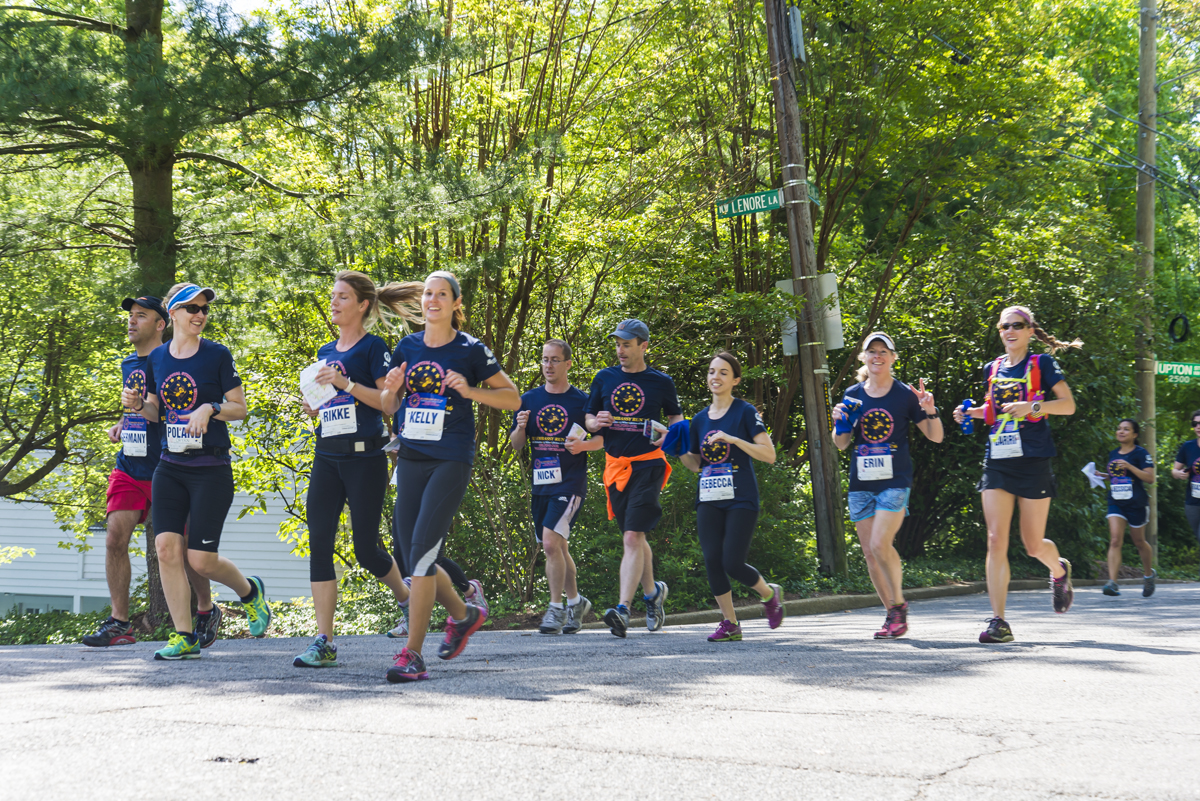 During the run, people got to know each other and made new friends.  The event was surely not a race, so people ran their own pace while enjoying food, culture and beverages.

But it wasn’t all a cake walk. First you had to run 10-13 miles and hope the Embassy would provide entry, before the lines, which snaked around the block, got too long.

Next there was a plethora of food and drinks at each Embassy, that it was hard to turn away, and running on a full stomach became an incredible, daunting task. 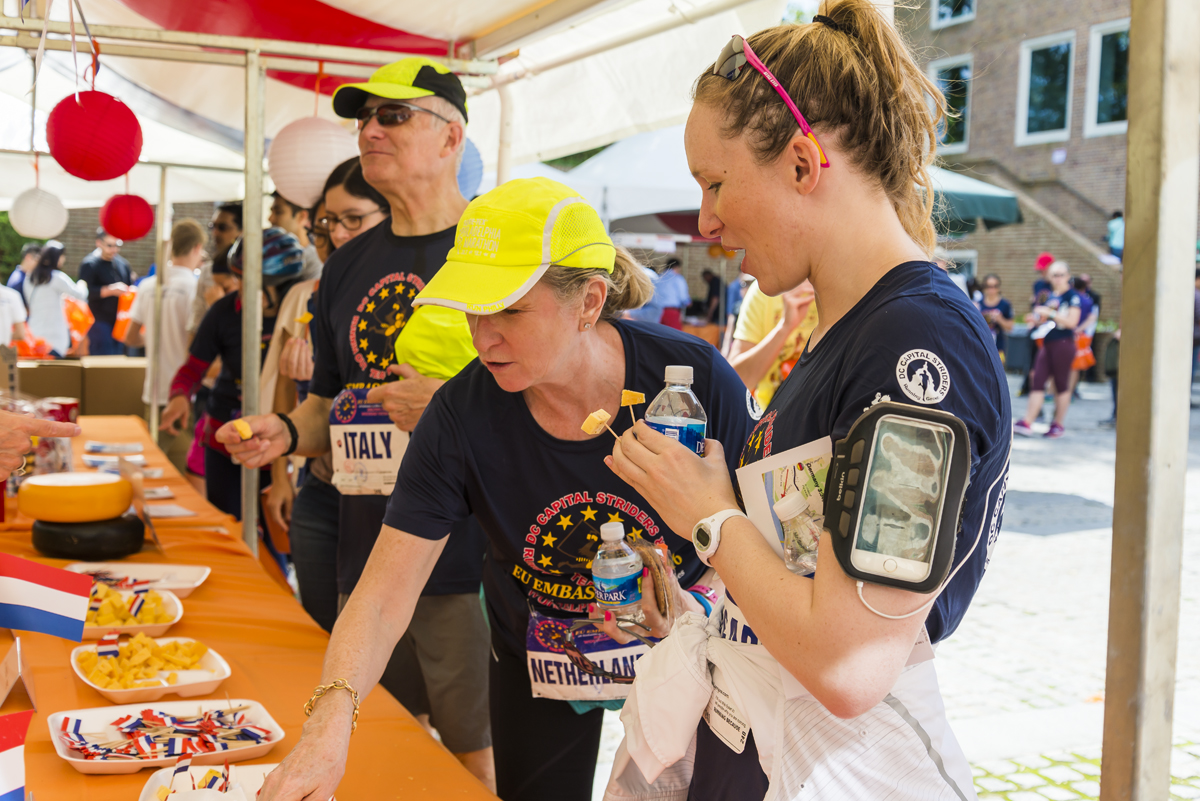 Last year, the run raised $1,000 for the Nepal earthquake relief. This year the amount was doubled, raising $2,000  for Team River Runner. 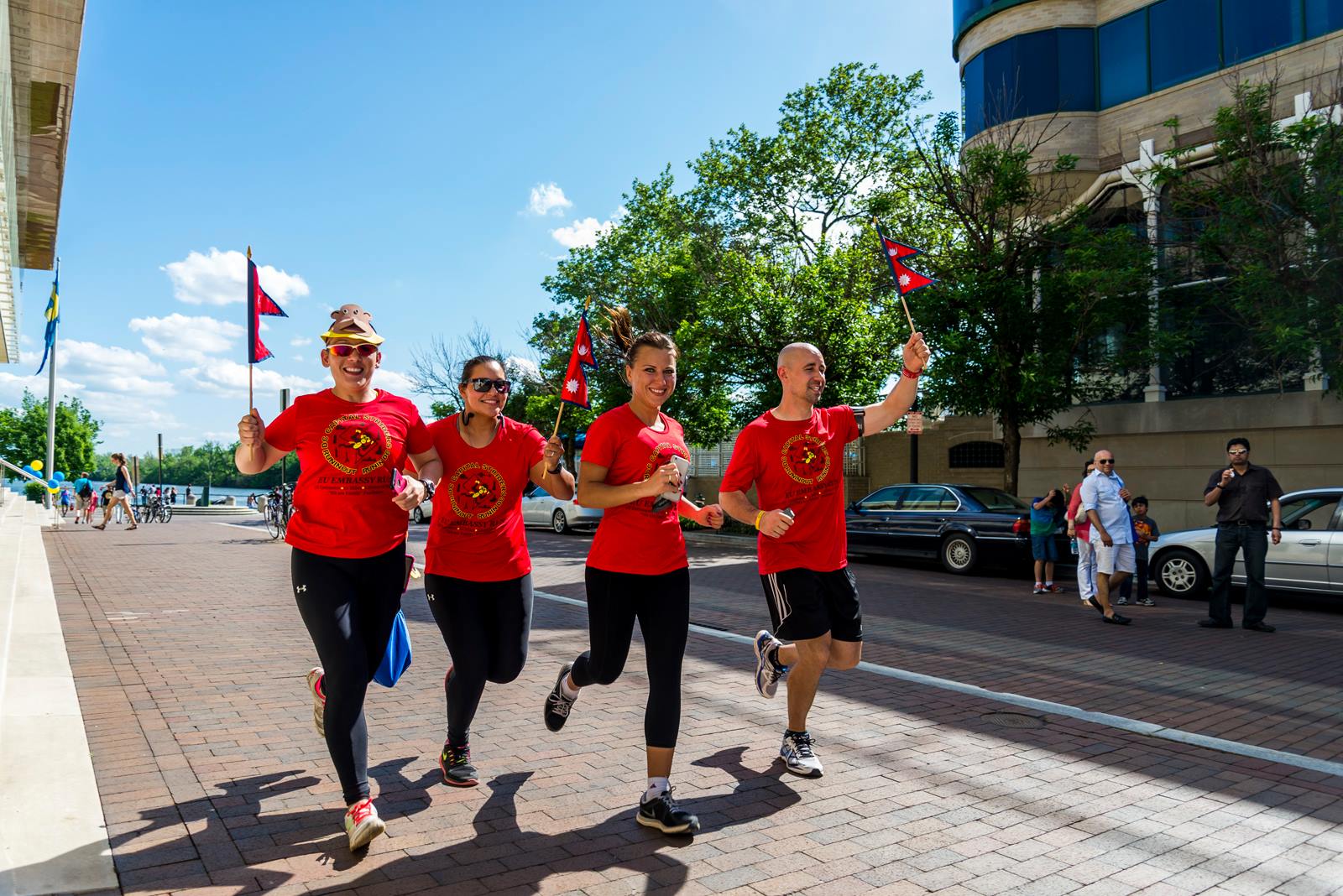 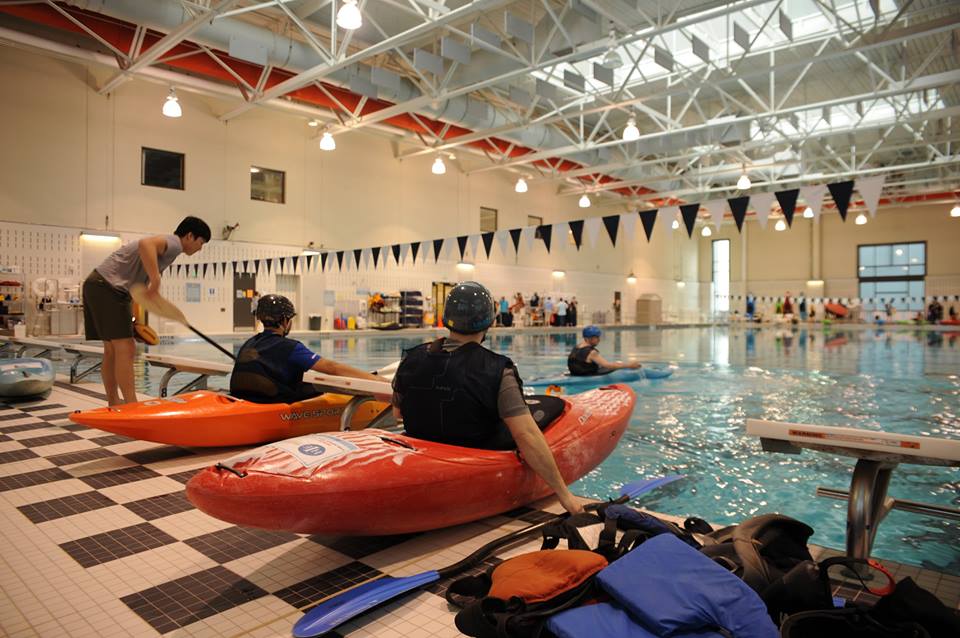 Team River Runner provides wounded service members, combat/injured veterans, and their family members with the opportunity to find health, healing, and new challenges through kayaking (whitewater and flatwater) and other paddle sports.

“I thoroughly enjoyed supporting DC Capital Striders and the Embassy Run,” said Joe Mornini, Executive Director of TRR. “We host a biathlon twice a year for our wounded warriors — and I know first hand the volunteers and commitment required to organize a big event.” 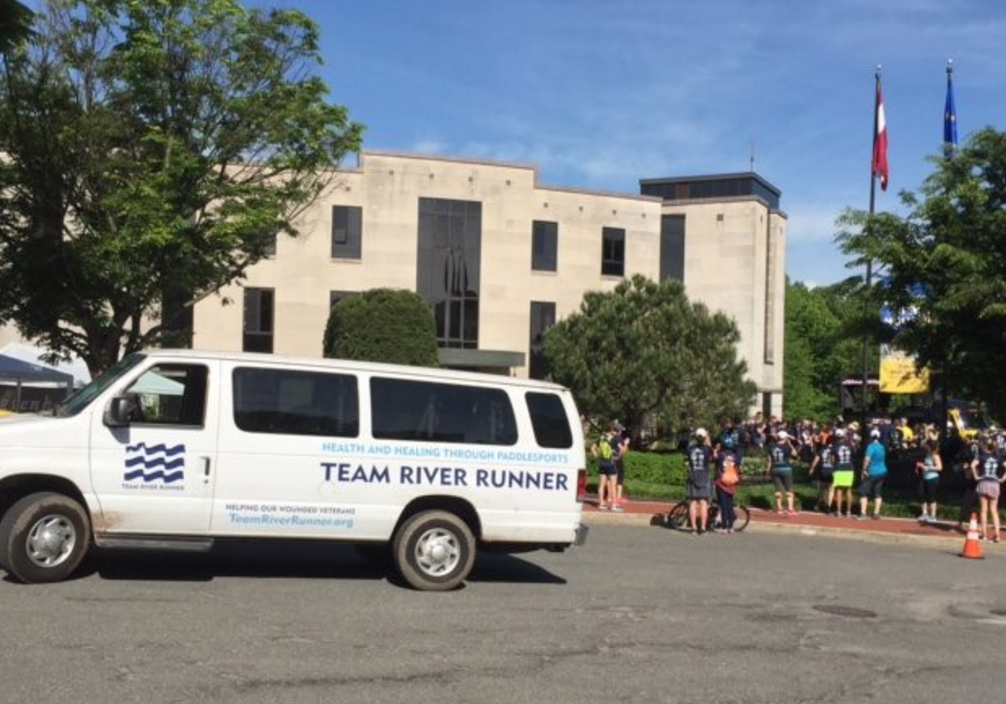 Mornini, a former high school teacher, co-founded Team River Runner twelve years ago. Veterans are attracted to whitewater and adventure kayaking because it offers an exciting way to improve their health, strength and connection with nature. 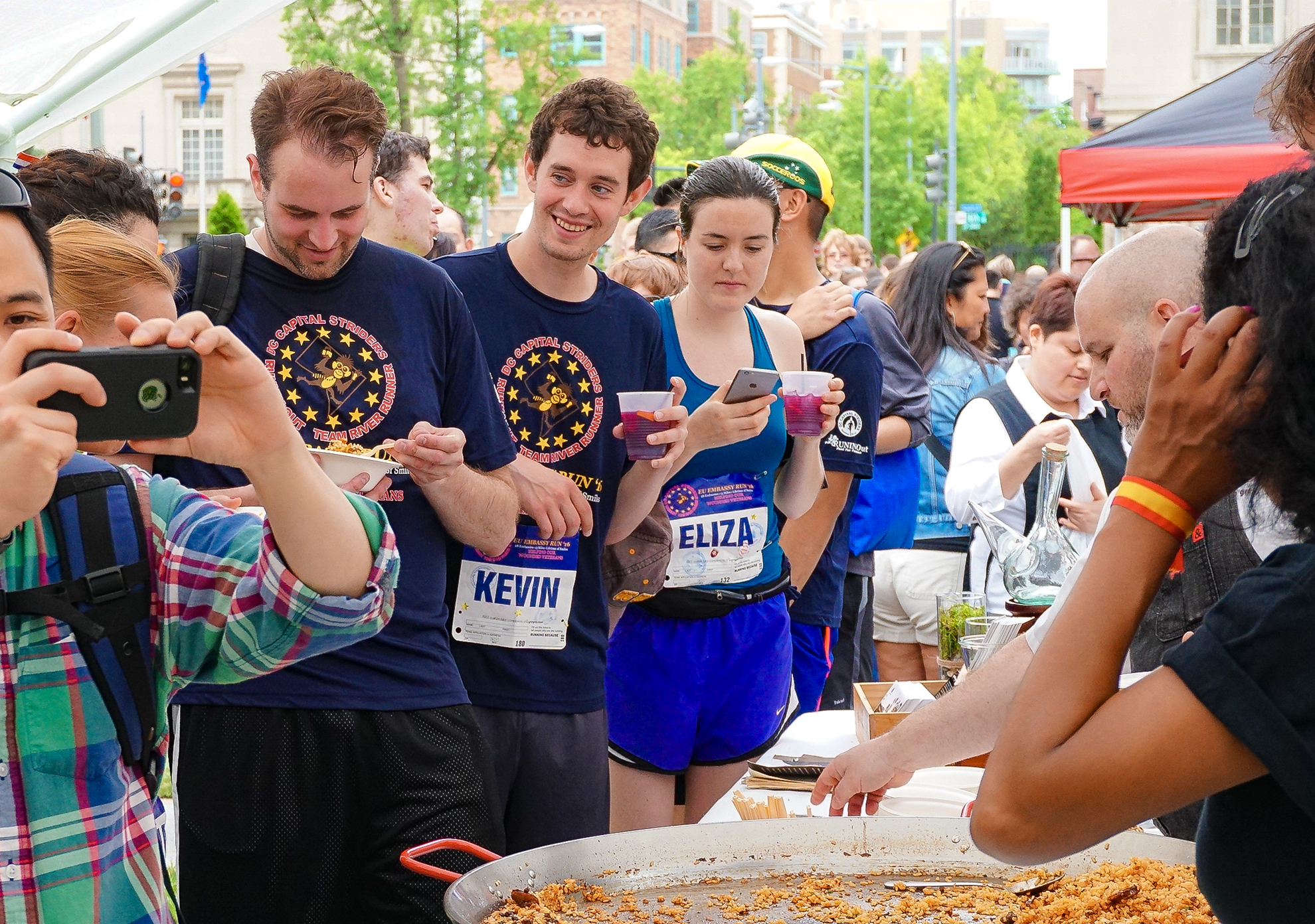 Group A lining up for the Paella

“The funds raised can be used to buy an outfitted adaptive kayak for a veteran with a spinal cord injury, as well as adaptive paddling equipment, personal flotation device and food and gas for day trip on the river,” said Nazanin Yousefnejad, Volunteer and Outreach Coordinator.

“It was a wonderful way to see the European Embassies, run with wonderful people and be a part of a terrific Veteran non-profit organization,” said Sofi Loomis. “Felt like a VIP which never happens.” 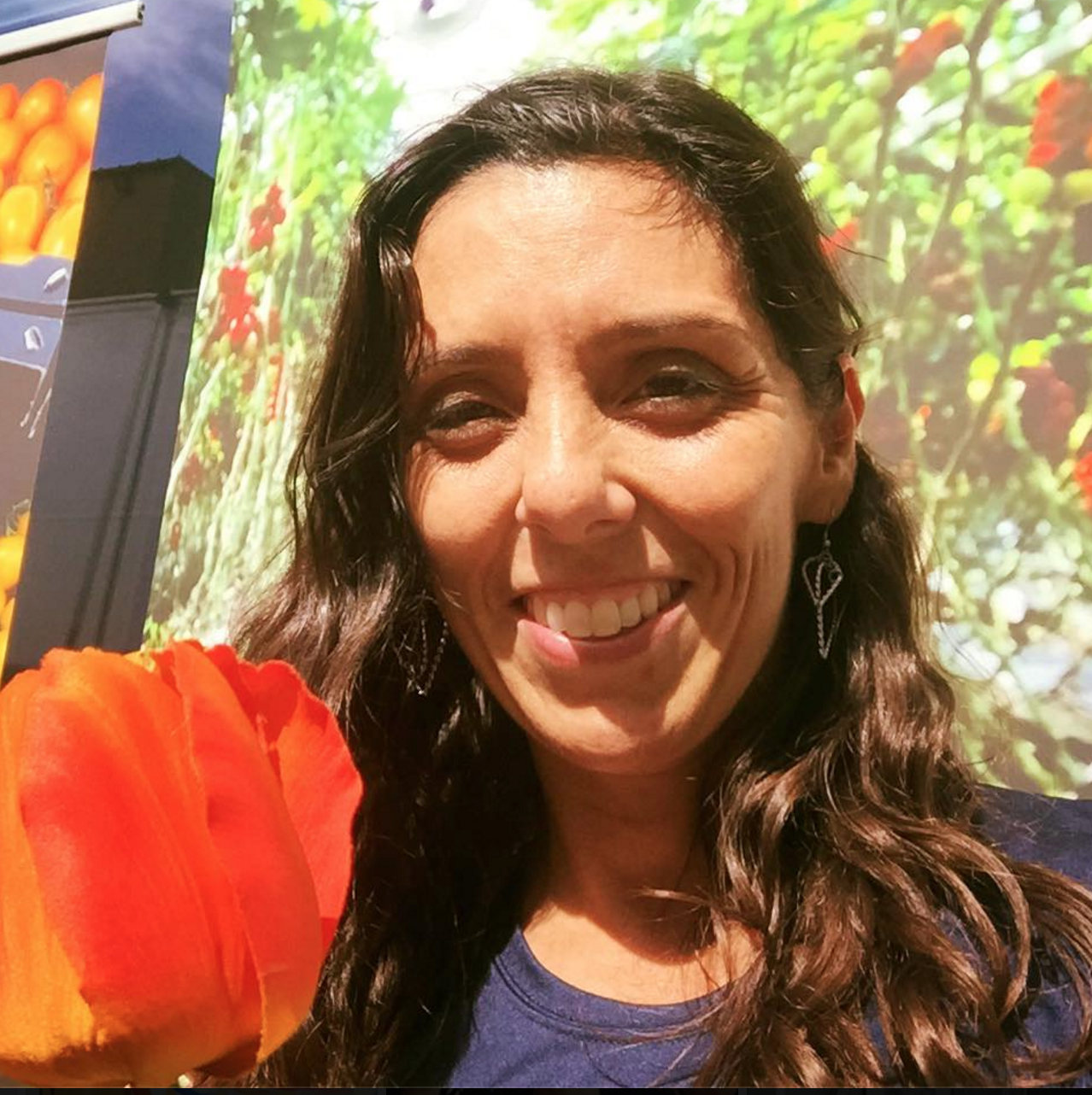 The run was able to accommodate more runners this year by adding an extra route — a bold move — that paid off in droves.

The run started at Austria with a quick jolt of Red Bull to start the day. Slovakia for folk music and dancing. Then a run past the Howard Law School to the Royal Netherlands Embassy for Pancakes, Dutch cheese and the obligatory Heineken. 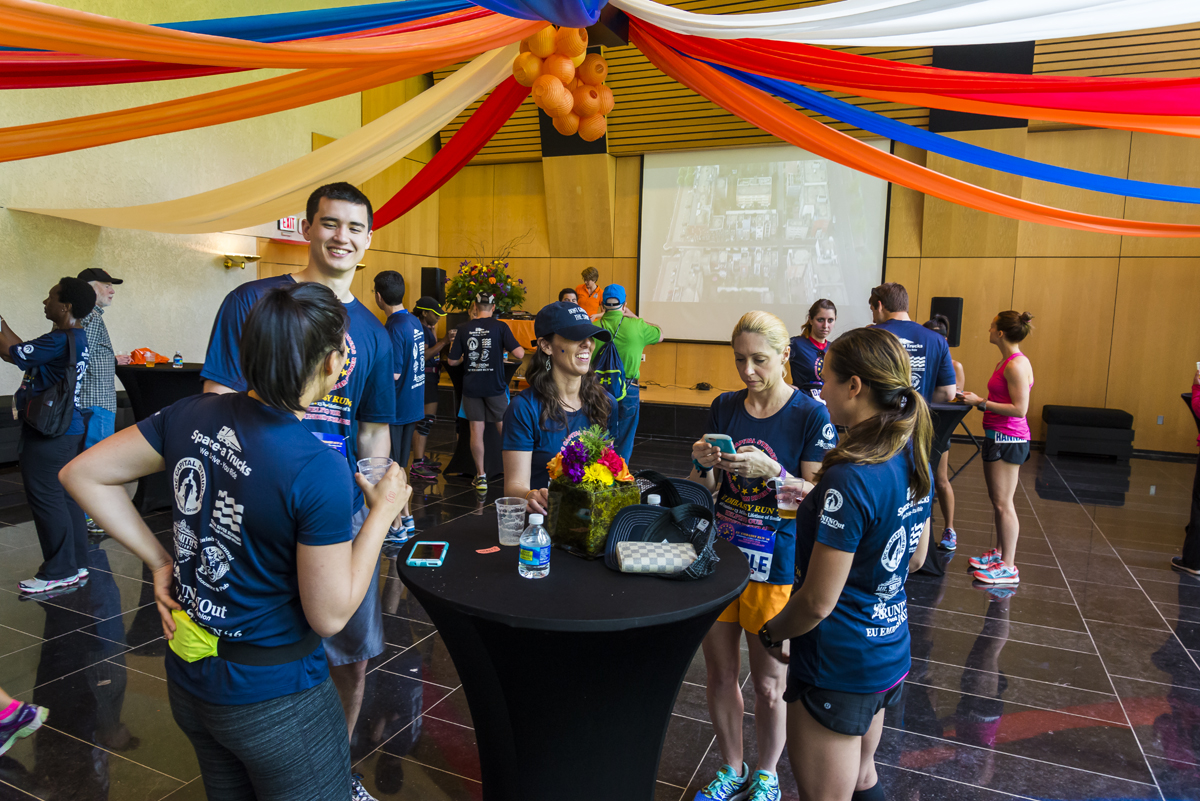 After Czech and Hungary where we met the skilled and adorable Vizala dogs, we took off on a long run to Adams Morgan for some tapas, wine and a taste of Spanish culture. 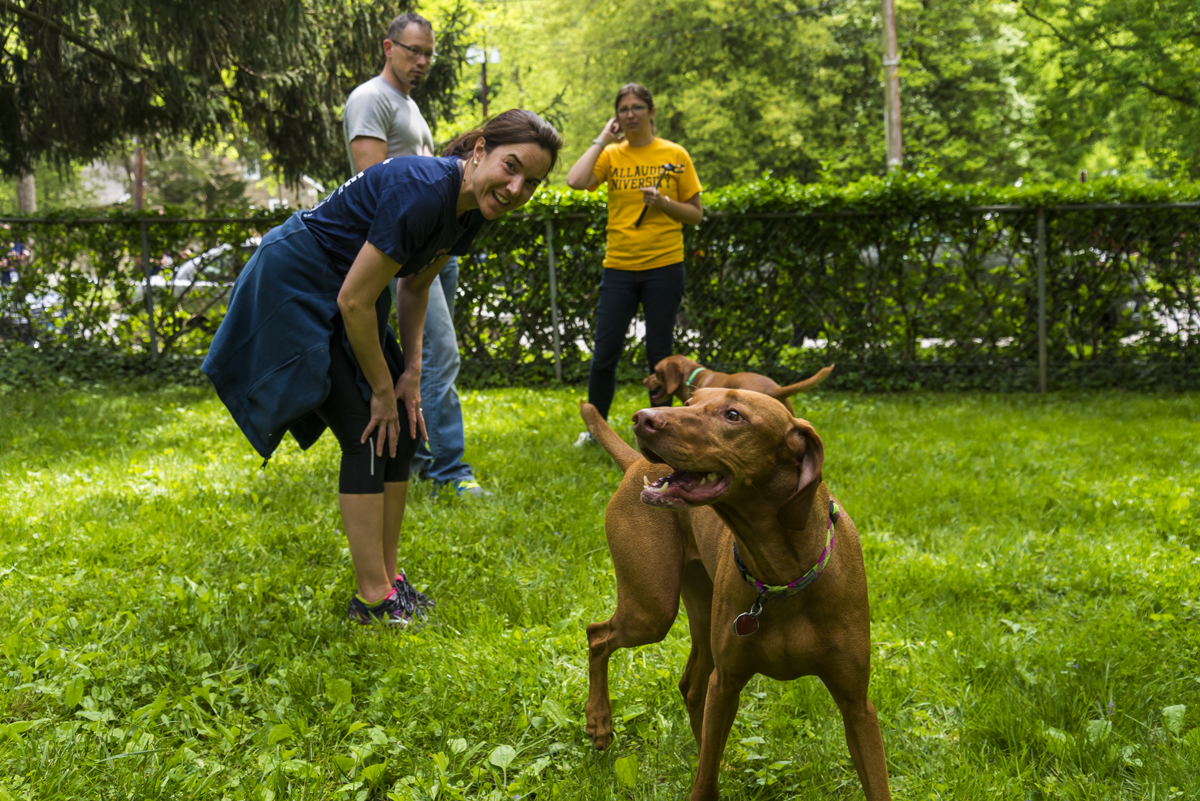 In Finland we got a VIP tour of the greenest Embassy in the US and was warmly greeted by the Ambassador’s staff. 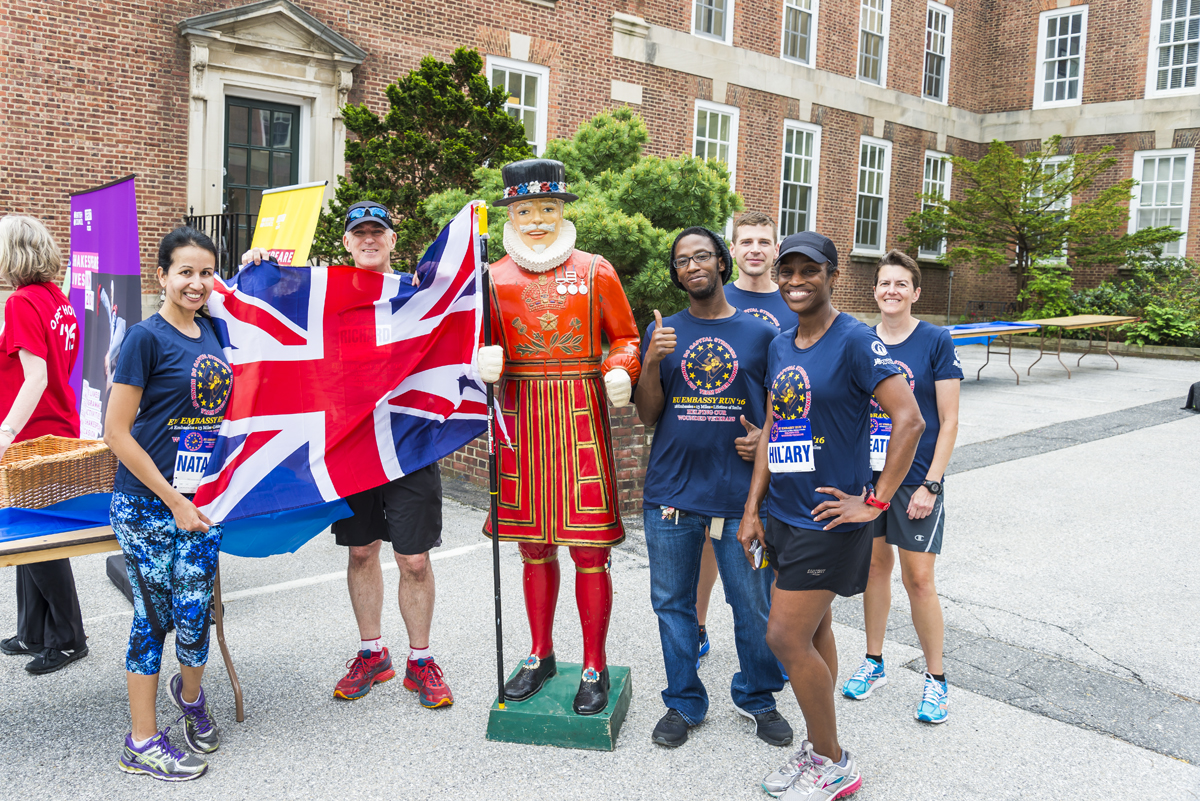 At the British Embassy was kind enough to accommodate many of us for a tour the Ambassador’s Residence and Gardens. 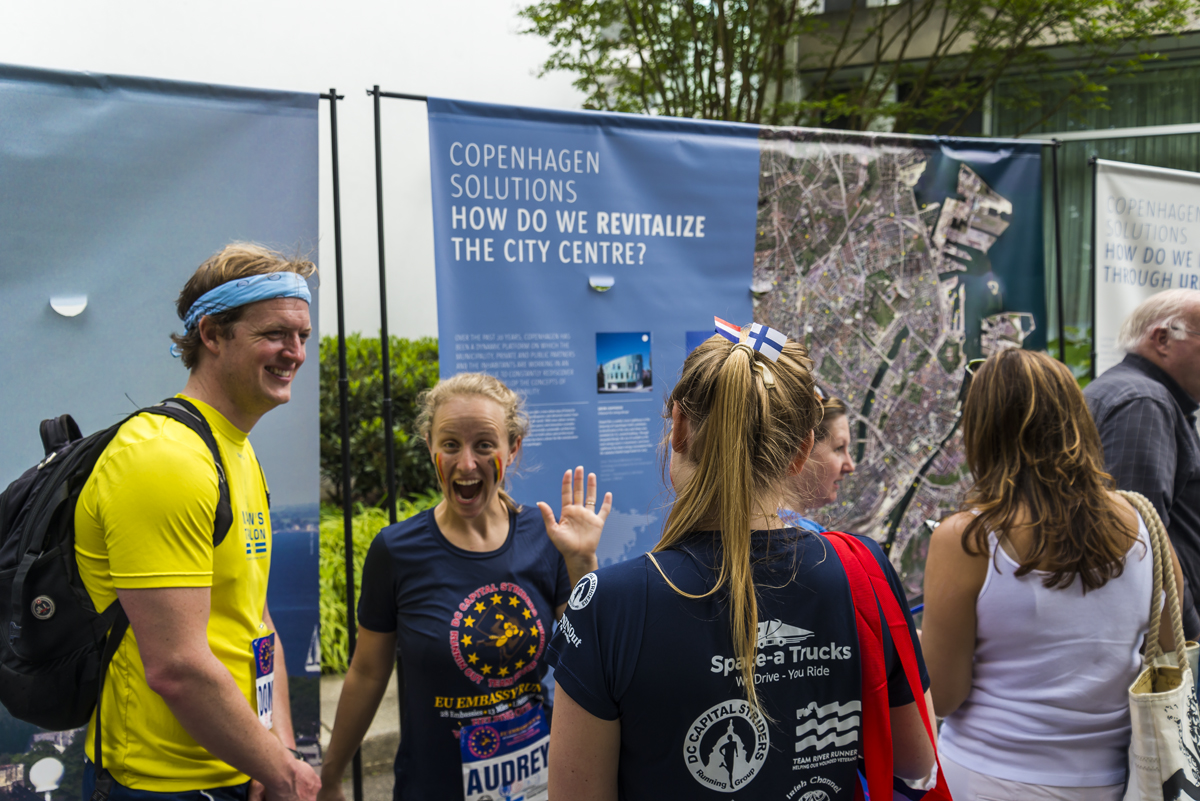 In Denmark we met many happy Danes who shared with us their culture and even caught a glimpse of the Prime Minister. Then we took off through the rugged Dumbarton Oaks Park into Georgetown.

Everyone was looking forward to Germany. The beer, brats, music and view — the experience was amazing and the view of Rosslyn and the Potomac River was quite stunning.  But then the skies opened up and with a cold front coming, everyone started our happy hour early at Mr Smith’s.

“We are very grateful to not only have been chosen as the beneficiary for this fundraiser but also to be able to spread the Team River Runner name and mission,” said Mornini
Team River Runner is always looking for more volunteers or veterans in boats so please visit their website if interested.
To see the photo gallery of the Run, please check out the Facebook page 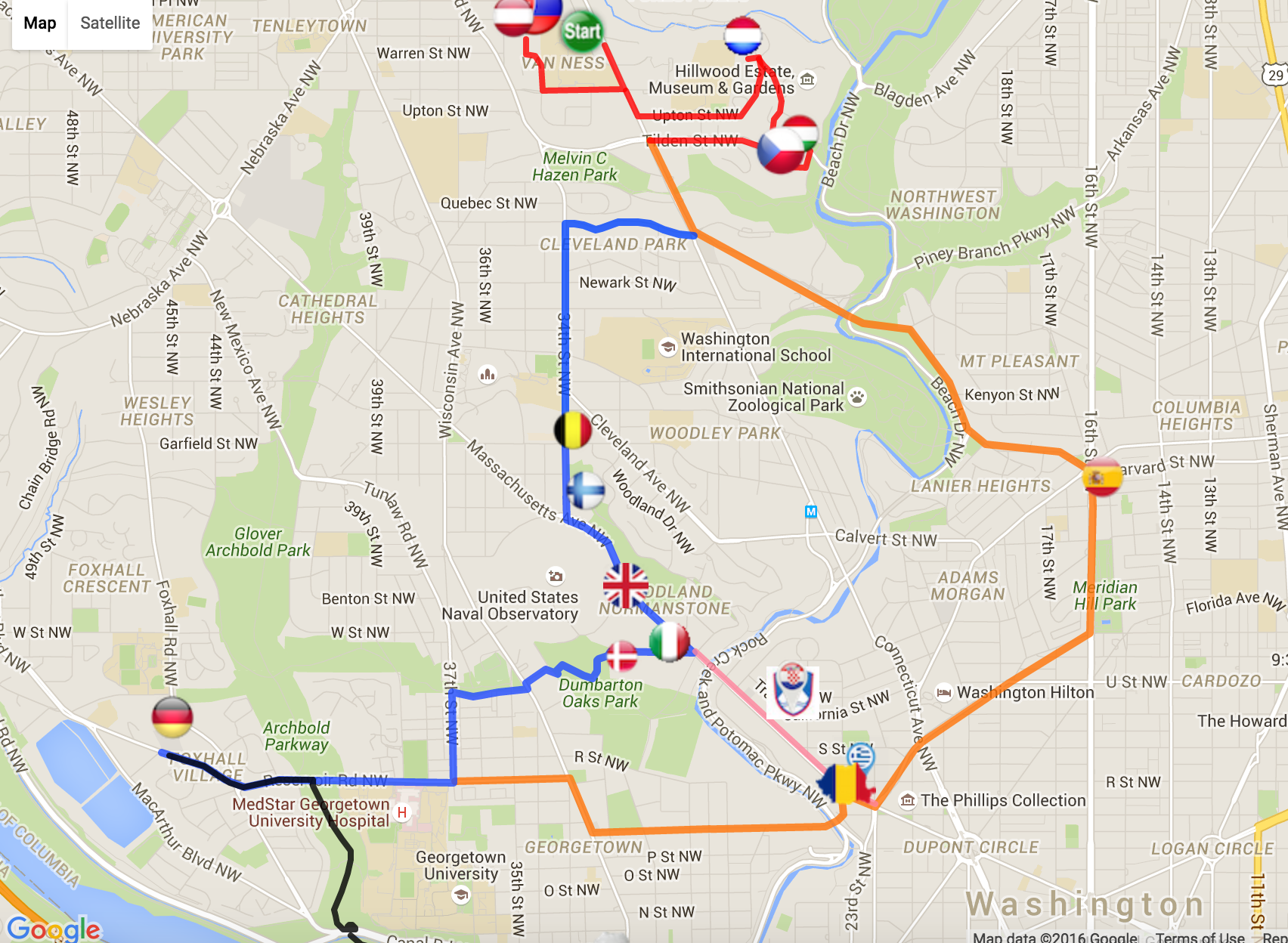