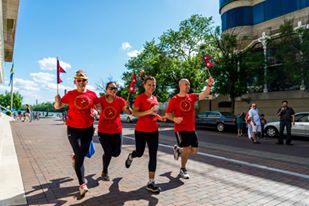 Last year a group of 40 runners casually met in front of the French Embassy on Reservoir Road on a Saturday morning to run 13 miles while visiting over a dozen embassies.

This wasn’t something they just randomly decided to do. It was part of the annual EU Embassy Run as part of EU Open House Day.

Due to the popularity of the event the run this year expanded into an organized event doubling the number of runners.