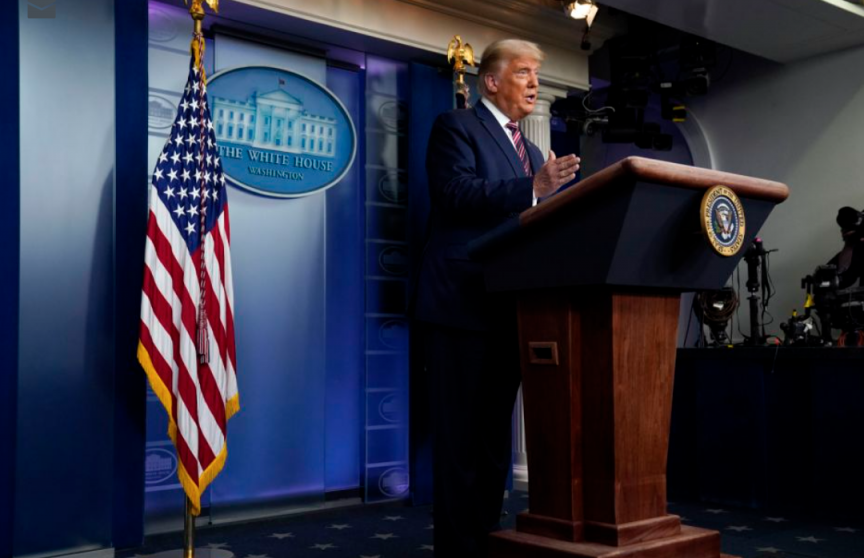 Today is a sad day in America. President Trump held a press conference and made egregious accusations that there is widespread voter fraud in several battleground states that he lost in or in states where his once big leads were gradually dwindling.

Trump started the press conference taking his usual partisan, braggadocio tone stating that he received more votes than any Republican for president and gloated that the Senate and House races did very well. Yet he claimed without evidence that the election had been robbed from him.  If there was fraud against the Republican party, then why did every single House member get reelected?

The reason why the once-huge leads dwindled in Wisconsin, Michigan and then Pennsylvania and Georgia is because of the way these states chose to count the votes.  It’s easier and quicker to count the ballots cast at polling places than the mail in ballots.  Some states chose to start counting the mail in ballots before election day. Some chose to wait until after the last ballot was cast and to start counting the absentee ballots afterwards.  Since Trump told his constituents to not vote by mail, the vast majority of the mail-in ballots are from Democrats. This explains why many of these states started with a huge Trump lead but eventually turned Blue.

Trump who recently changed his home state to Florida has also voted by mail recently.  Due to COVID, mail-in voting has become much more common and readily available in 46 states.

Trump claimed that Detroit and Philadelphia are known as the two most corrupt cities in the country. He should know this since he attended The Wharton School in Philadelphia. He is upset that his once sizable-lead in Georgia is in jeopardy of disappearing.  Interesting also that the governor of Georgia, Brian Kemp, is a Republican and a staunch Trump ally.  Is Trump accusing Kemp of fraud?  In 2016, Trump made accusations of voter fraud and promised an investigation.  He had four years to make any changes, which he failed to do. So if there was any widespread voter fraud, it happened under Trump’s administration and on his watch.

Trump also criticized the pollsters who again got it wrong.  Many had called for a landslide and Trump claims this was voter suppression.  The Quinnipiac poll had Trump winning in Wisconsin by double digits, claiming that this would suppress his voters. Actually it was the other way.  The Republicans have been all about voter suppression -that’s how a frightened minority group won.

Trump claims that he will take his unsubstantiated claims of voter fraud to the Supreme Court. But first he has to take his challenge to the lower courts and provide evidence.  Because he’s president, Trump thinks that judges have to do what he says.

Trump showed his hypocrisy by having his people send a team to Arizona to ensure the remaining mail-in ballots are counted while filing a lawsuit to stop counting in Pennsylvania and Georgia.

TV Networks have criticized Trump and many actually cut away from his full speech. “We have to interrupt here, because the president has made a number of false statements, including the notion that there has been fraudulent voting,” said NBC’s Lester Holt. “There has been no evidence of that.”

Anderson Cooper from CNN described Trump as an “Obese turtle in his back, flailing in the hot sun.”

Hopefully Republicans will stand up to him and advise him to man up and take the loss like any gentleman just like McCain, Romney and Hillary Clinton did when they lost their races.

Sen. Marco Rubio [R-FLA] tweeted that if a state is violating election laws, a candidate has a right to challenge it in court & produce evidence in support of their claims.’

Maryland GOP Gov. Larry Hogan said “There is no defense for the President’s comments tonight undermining our Democratic process. America is counting the votes, and we must respect the results as we always have before.”

Sadly, we see Republicans capitulating. Senator Lindsey Graham [R-SC] is donating $500,000 to President Trump‘s legal defense fund.  Trump listed his string of conspiracy theories in the White House, an unprecedented act by a sitting president, while the rest of America and the World watches in shock.