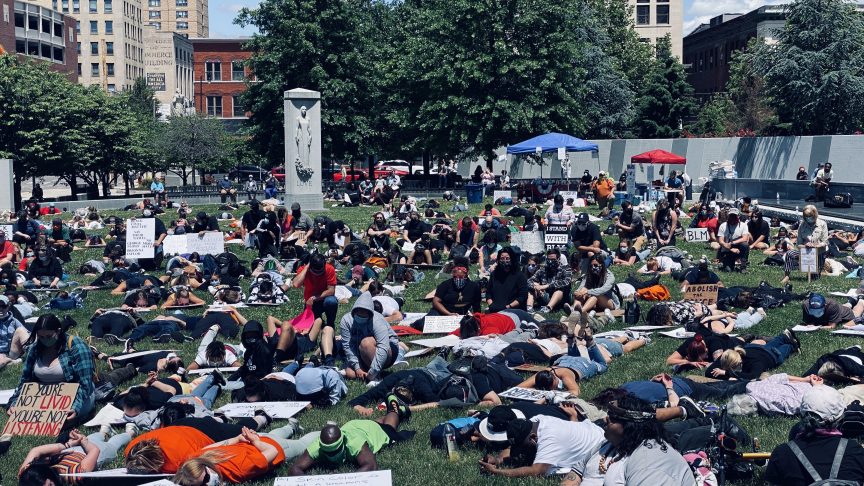 Black Lives Matter was a peaceful rally in front of the Lackawanna County Courthouse including 8:46 mins of moment of silence for George Floyd.

Some people say that “Black Lives Matter” is a farce. They claim that it’s just an excuse to riot against the police and the rule of law in the name of peace.

But saying “Black Lives Matter” is not to say that other lives do not. It actually recognizes that all lives do matter and that Black Americans are often unfairly targeted by businesses and law enforcement. Studies have shown that African Americans are often treated with deadlier force than Whites.

Many local activists spoke to the supportive crowd and some prayed with local leaders. Everything was clicking along without any issues. Then a truck with Trump signage made an unwelcome visit causing to tension and disruption. Fortunately, the BLM protestors were able to maintain calmness despite the taunts of Bob Bolus.

Police brutality exists worldwide. It exists in Hong Kong where China is moving to end the region’s autonomy from communist rule. That’s why it’s refreshing to see people around the world joining the US in solidarity, chanting “Black Lives Matter”. And thankfully it was a peaceful protest with lots of motivating speeches and discussion. Until the Trump truck, owned by Bob Bolus, visited to disrupt the thus-far peaceful rally. Protestors then put Bolus and the Trumpers in their place

So you say that Trump doesn’t care about social distancing.. apparently So-called BLM doesn’t either.. the hypocrisy is deafening ! But predictable