The following weekend, Zach and I were in my Subaru Baja driving at full speed on the NJ Turpike to NYC.
“Why are we driving up to the Big Apple just to pick up a damn rickshaw?” Zach asked incredulously. “Segways are all the rage on the Mall.”
“So we can hang signage promoting our brand and ride it all over town.”
“Can’t you just buy one in DC?”
“There’s a premium for these three-wheeled wonders in the metro area. But in NYC, where their popularity was spurred, there’s a super abundance.”
Many tourists choose to ride the pedicabs instead of taking a bus or taxi because it allows them to observe the surroundings better and because the bikes can squeeze through heavy traffic. And sure enough as soon as we crossed the Lincoln Tunnel, the busy streets of Manhattan were congested with taxis, bikes, scooters and pedestrians. One pedicab driver just purchased a medallion to own a taxi and was selling his weaning out of the travel destination business. He was happy to let it go for $1800, and I was delighted to take it off his hands. We deftly squeezed the pedaled contraption on the bed of my Baja and with the handlebars hanging over carried it home to greener pastures. When we landed at the Mall and took her on a spin down Constitution, she looked a Lamborghini basked in sunshine.
“I will dub her Lil Yellow.”
“Yes she looks sleek and will definitely turn some heads.”
“She’s not just for advertising, she’s to make a few bucks, and you’re welcome to ride Lil so you can earn extra beer money. How else is a scavenging Colonial supposed to survive. I know it sucks been a non paid intern.”
“Yes getting paid with cheeseburgers and subs gets old after a while. Yes, I’ll love to take her on a spin after class and see if I can coerce some stray tourists to pile on.”
“Sounds like a plan. And don’t forget we’re not licensed to charge a fare, but can easily take donations.”
“Super, I’ll bring along my school work which I can tackle when there’s a lull.”
“Yes, please use your time wisely, and take the opportunity to learn more about the history and landmarks so you can better inform and entertain your guests.”
When Zach was parked at the green zone in front of the American History Museum, he spotted a pretty Persian girl with long brown hair and knee high socks. Tall and tanned, she looked like a super model on wheels, and it was very clear that she was super passionate about her mission.

Her name is Shaadi and she was a former elementary school teacher turned into a an enterprising rockstar.

“How did you get into this business dominated by jocks, old vets and hippies?”

“Well, I got into an accident and doctors found a tumor in my left leg.  They removed it, and the tumor returned. When I was rehabbing on a stationary bike, it was challenging to have my right leg to get my other leg to go around. So I made a pact with myself. ‘The day I can ride my bike again, I’m gonna ride for 50 miles and I’m not gonna stop.’”

Shaady took Zach under her wings and got him up to speed on the history and background of this fledging business.

Last summer the Park Police started cracking down on pedicabbers on the Mall.  They claimed we were cutting into the Tourmobile monopoly that the National Park Service had a long-term contract with. An operator was attempting to pick up customers in front of Smithsonian Air and Space Museum when he was tased, tackled and arrested.

“Yes, we’ve come to truce now. I love your silly monkey logo by the way. I’ve got six pedicabs and would love to advertise your brand on our backs.”

Zach with the assistance of Shaadi eventually developed into a consummate tour guide professional, hustling tourists all around the Mall and pointing out historic landmarks while dishing out witty anecdotes.  People found him engaging, personable and were happy to dole out cash to an enterprising undergrad. 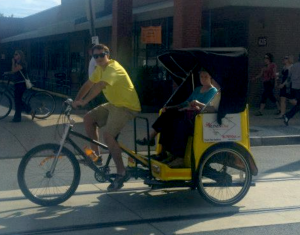 Indeed, the nightlife crowd on 14th and U Street was great for business. On Friday nights, Zach would often stay on the road till past 2 a.m. when he was done ferrying all the drunks to their dorms and residences.

“Love how environmentally-friendly this is,” stated a tourist from Maine. “Summer days are just roasting, and we’re just too exhausted to walk up and down the Mall.  Take your time and tell us all you know about the spots.” 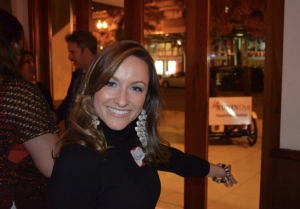 Dropping off party-goers in Lil Yellow

When Zach wasn’t using the cab to shuttle tourists, Lil Yellow was employed during multiple events such as Taste of DC, where we interacted with various vendors such as the Cupcakes Lounge.  The multi-day culinary event along Pennsylvania Ave attracted some of the region’s best restaurants and lively entertainment.

People loved the thrill of ride and they loved posing and shooting selfies. Even met a young, newlywed couple who deemed it quite romantic and were found smooching in the back.

“Are we allowed to drink inside the cab?” a passenger asked meekly.

“I don’t see why not. The only stipulation is that the driver can’t drink. But please buckle up.”

During our reconnaissance and cold calls with Suzannah, I would drive the pedicab and she would sit in the back waving at dumbfounded passerbys.  From time to time, we would pick up a sightseer or a tipsy passenger bar crawling along H Street.  Lil Yellow was our lucky charm.  We were able to to negotiate business with Biergarten Haus on H, Ulah on U and Jake’s American Grille in Chevy Chase. 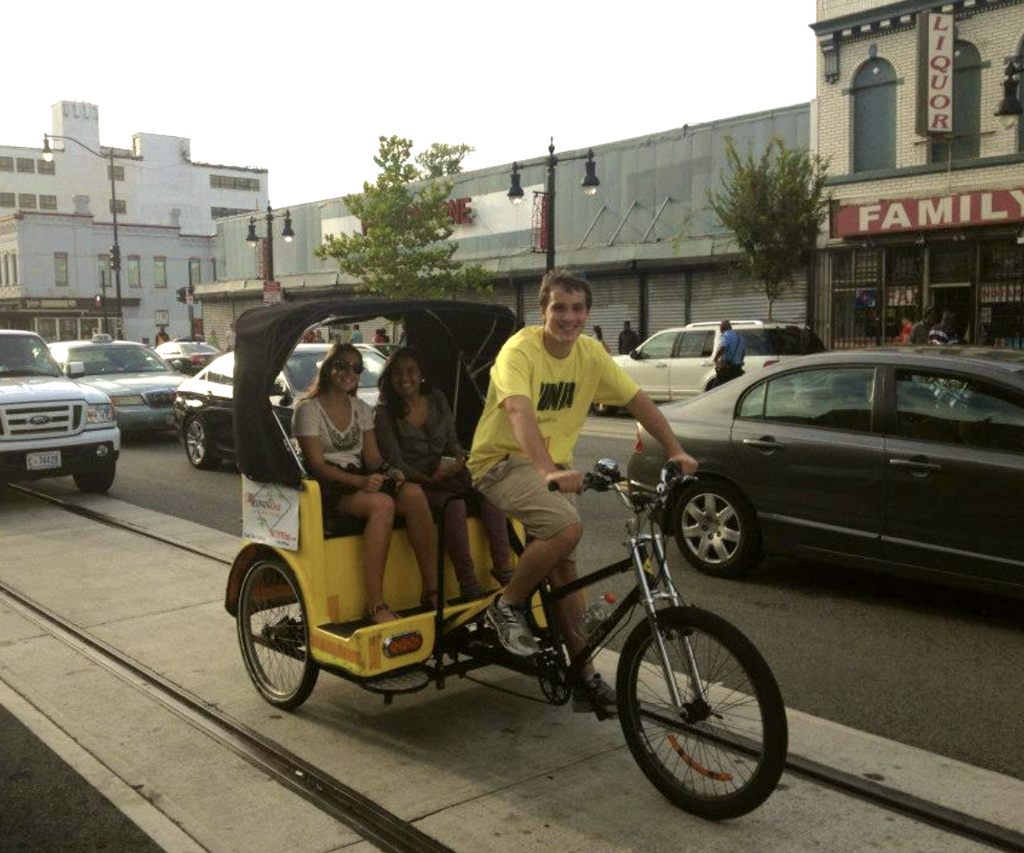 Our pedicab and signs got a lot of attention, and we were invited to provide complimentary rides during the H Street Festival, the quintessential 10-block street party featuring live music, karaoke stages, live music and yes, even belly dancing.

It was a sweltering, hot day, and many people were tired having to walk from 3rd to 14th street.  My illustrious intern agreed to provide rides as long as I provided refreshments and he kept all the tips.

Every year, the British-themed double decker bus would be parked in front of The Queen Vic where Newcastle Brown Ale flowed like the River Thames.

There was a half-pipe for local skateboarders. Dangerously Delicious Pies sponsored a hands-free pie-eating contest and the grungy ex-funeral parlor turned lounge, Rock and Roll Hotel, pumped music all day.

Zach and I got to meet so many people, attendees, business owners and artists.  One gifted performer specialized in Egyptian belly dancer, and she was quite a gifted performer. Dressed in a red chiffon hip scarf, the Arabian beauty swayed her hips and shimmied her body fluidly to the audience delight.  I didn’t catch her name, but I promised I would next time I see her act.

There were also tons of local artists such as Pete Baker and Flo Anito was strumming her guitar and singing her tongue in cheek ballad to the vacuum “No Dustbunnies.”

Flo is a classically trained vocalist and pianist and sang like a blue jay on a hot summer day.

We also provided support at the Marine Corps Marathon cheering runners and even offering free rides to spectators or exhausted runners who wanted to beat the  (14th street) bridge.  Runners had to maintain a 14 min/mile pace until mile 22 or else they would be taken off the course and bussed back.

The ending was great with Marines in their BDUs shouting “Oorah” and handing out the coveted Eagle, Globe and Anchor finisher medals. There were many photo-op moments. We all had a blast. Kanita lost her voice screaming and applauding.

It was the best block party in town. There were tons of people and lots of random conversations.  It was the best marketing event we could dream of and the word was definitely getting out that RUNINOut was about rides.

“I have an idea for an event.” Suzannah said. “Hold a reelection night party for Obama at the Rocket Bar in Chinatown.” 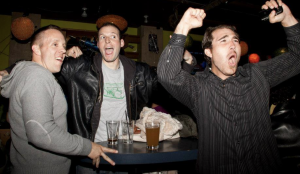 For the next four months, we hosted well over 15 events, sometimes a couple times a week.  In a town with so much going on, we were always able to attract a large gathering.  And we cast a wide net to reach out to a wide demographics.  It was part of our ‘Understanding’ different people and different cultures.

We often co-hosted events with other groups such as the DC Food Bloggers, 20s and 30s Networking, etc and virtually all of our events offered complimentary food:

Then on April 2013, after many more events, miles and miles of pedicab rides and tons of food blogs, the hard work paid off. RUNINOut was selected as “Best Restaurant App” by the trendy people of DC and we along with all the Readers’ Choice winners were recognized at a reception at the Carnegie Library.