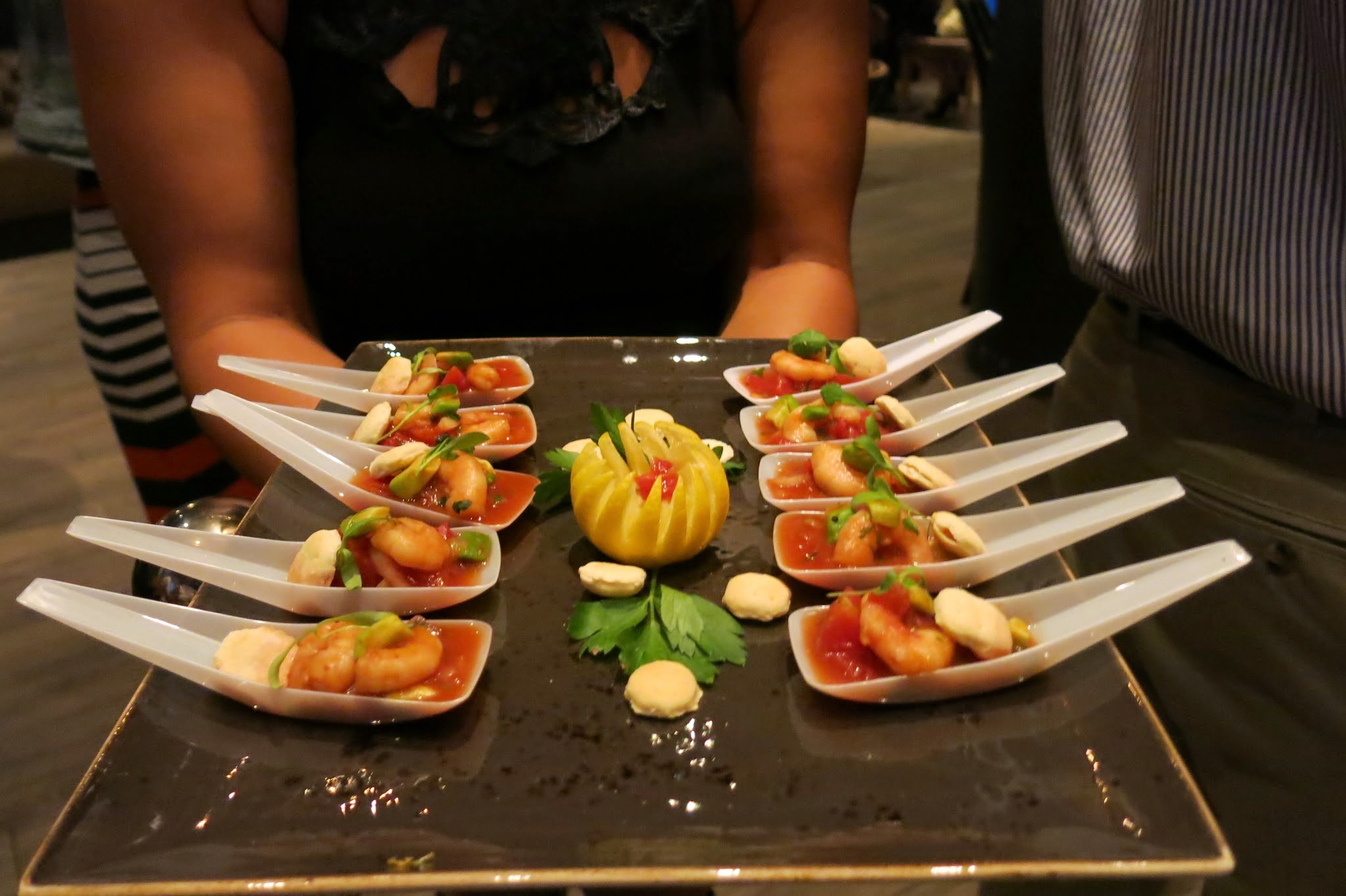 Located on Connecticut Ave Nw. In DC right around the corner from the Dupont Circle Metro, The Gryphon is a restaurant and bar with an old world sense of style. Sporting black walls, leather sofas, gilded mirrors, mounted bull’s heads and antler chandelier. This location is impressive in size and scope for sure and was easily able to host two large Meetup groups at once with no trouble.

I was invited to attend the PR Flack Meetup group and give my opinion on the appetizers served to the lively and fun group. First up were single serve spoons filled with roasted cauliflower atop a savory orange sauce. The cauliflower was roasted to perfection making the cauliflower crisp-tender with a slight smokiness to it. The sauce was fairly mild but accented the cauliflower nicely. Next were deep fried pickles served with a white dipping sauce. The pickles were well cooked, and still crisp and juicy on the inside of the light breading. The rather light flavor of the horseradish sauce complemented the tang of the dill pickle nicely. Not usually a fan of pickles I found this bite surprisingly satisfying.

The skewers of chicken and waffles were very pleasing. The waffle had a sweetness to it was was pleasant without being overly sweet. The piece of chicken, which was breaded and fried, was delectable. It was not overcooked, crisp outside and tender inside, and the flavor was spot on, not over- or under-seasoned. The combination of the two was worth going back for seconds later in the evening. I have to say the way the PR Flack group enthusiastically devoured all the appetizers speaks volumes about how fabulously delicious they all were.

One of my favorites of the night was the bruschetta which were light and tasty. The slices of baguette were lightly toasted yet still plenty soft. Half were topped with ripe split cherry tomatoes, a delicious balsamic vinegar and a smear of luscious goat cheese. The other half had plenty of scrumptious thinly sliced prosciutto piled over a dollop of honey mustard and it was melt in your mouth good. Have I said before how much I love good prosciutto? If you do too, you must try the Gryphon’s bruschetta.

Now for my absolute fave dish of the night, mini beef sliders. Oh wow, first off the patty was cooked medium well instead of well, which I and others in attendance agreed was a great idea. The burger was so drippingly juicy they really should have provided little plates for them or at least napkins. But regardless of the mess it was well worth it for these small jewels. Served with thinly sliced pickle, a full-flavored mustard and onion on a toasted bun I could have eaten a half a dozen of these easily. I almost always shy away from sliders on menus because I think the smaller portions make it difficult to achieve the same heavenly result of a good full sized burger. The Gryphon’s sliders completely changed my mind on this stance. The next time I want a burger but don’t have room for a full sized one I will head straight to the Gryphon for their succulent sliders.

Next came teriyaki beef skewers which managed to be charred yet tender at the same time. The savory and sweet taste was good but unfortunately left me wanting more as the individual serving size was rather minuscule. It was literally one bite. I’d like to try it again in a full size version as I think it will be great. Lastly but far from the least were single serving spoons of shrimp cocktail. This was my third favorite hors d’oeuvre personally. The shrimp were fresh, tender, cooked just until done and not a second more, and sitting in an exquisitely zingy cocktail sauce that is my favorite to date. It was clearly made in house. Cilantro and avocado rounded out the dish blending perfectly with the shrimp and the sauce.

All in all I definitely give the Gryphon a solid A. The place is beautiful, the location could hardly get better and the food is on the whole superb. Because of the enormity of its interior the Gryphon is a fantastic place for large social gatherings. It is so large in fact it can be divided into two large areas by curtains and both parties can still have access to the bar. Then they still have room for smaller groups to dine separate or sit on the patio. As for the bar, the happy hour specials are worth trying. They had one of my favorite ciders on hand and the specials specifically for the group included a wonderful Mer-tini which tasted like a peach, yum! The bartenders are also great, friendly and attentive. Next time you are in Dupont Circle stop in, you will leave happy I promise.

To book an event at The Gryphon, please contact Ashleigh Payne at Events & Marketing. She will take fabulous care of you like she did for us.