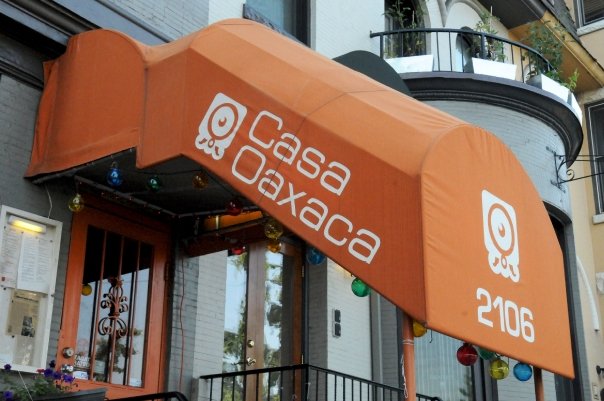 This relatively small Mexican restaurant is located on 18th st in Adam’s Morgan several blocks south of Columbia Rd. The interior is festive with bright summery colors and sombreros hanging on the walls. The bar displays cute lighted stars hanging from the ceiling and authentic animal hair upholstered barstools. All in all the decor worked for me. What also worked for me was the food. While this was not the very best Mexican food I have ever had it was delicious, featuring simple yet flavorful central and southern American recipes.

topped with salsa and a nice Oaxacan cheese. The salsa had a nice medium hot heat that will suit most palates and the cheese added just a bit of saltiness but was otherwise fairly mild. I opted to pay extra for one of the drink options offered with the Restaurant Week menu. The Georgia Lopez was a delightfully light cocktail of fresh peach sangria with a sweet Riesling and apples. The peach pieces were tart/sweet, crisp and just ripe. It was great refreshing drink and worth the $5 cost

As my appetizer I picked the Molotes de Huitlacoche. The lovely manager, Joahna Hernandez, shared with me that it is a summer version of a traditional holiday dish.  Molotes in this instance are basically empanadas that have been sliced into spears. They can also be thin filled pastries rolled into cigar-like shapes and fried. As it was explained to me Huitlocoche is a mushroom that grows on top of corn. A little more investigation into this ingredient later reveals it is a disease caused by a fungus that infects corn kernels also known as corn smut. Luckily I had no adverse effects form the fungus and it turns out it is actually good for you! I understand why it was described as a mushroom though as it does have an earthy and slightly sweet flavor. I say be adventurous and give this dish a try. The molotes were also filled with corn and onion. I thoroughly enjoyed this dish the mix of the savory and sweet as well as the heat from the Chili de Arbol sauce. It is a pretty spicy pepper and it will hit you in the back of the throat. As far as Mexican appetizers go I give it a big thumbs u

The main entree was also very good. The short ribs were cooked just right, they easily came away from the bone, and seasoned savory and sweet using tamarind paste which on its own is p. It was different than any I have had before and they do say that variety is the spice of life.

both tangy yet sweet.

They also had a wonderful smoky flavor and a little kick of heat at the end that lingered on a lips for a bit. This dish came with a citrus salad that had some tartness to it that mixed well with the sweet of the mandarin oranges and sharpness of the thinly sliced red onion. The rice was classic and homey. It was not over-complicated containing bits of carrot throughout and fresh chopped cilantro on top, which is one of my favorite herbs. It was seasoned mildly but lacked for nothing in the flavor department and was a nice balance to the spice and tartness of the rest of the plate.

So far everything was good but what really knocked my socks off was the prickly pear sorbet. Created from fresh prickly pears which are native to Mexico and in season right now, it takes 3 hours to make this dessert from scratch. And thank goodness for Casa Oaxaca taking the time to do this right, stirred slowly in a wooden pot surrounded by rock salt. Prickly pear was a fresh adventure for me. The sorbet was light, had a crisp clean taste and was sweet but not overly sweet. I surely appreciated this refreshing dessert. Having not had a prickly pear before, I found it to be somewhere akin to an Asian pear flavor or similar to lychee. My waiter shared that in Mexico prickly pear juice with ginger is a tonic to help clean you out. It was a very informative day for me which is great seeing as my philosophy is to learn something new every day.

I found the service quick, friendly and attentive. I felt very comfortable in this establishment. I will say my only real disappointment was that complimentary chips and salsa were not provided with the restaurant week menu. Other than tat I give this place and A for their good pairing of flavors, fresh ingredients and authentic recipes.

Annamaria lives in Alexandria, Virginia having recently moved to the DMV from Ohio, and you could say she is a jack of all trades. She critiques local food and drink, mystery shops, writes and creates her own gorgeous knitwear. In her spare time she can be found at the pool or visiting one of her favorite watering holes in NW D.C. Twitter.com/meinemaria