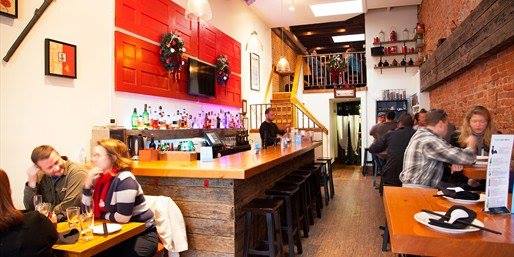 Almost a year ago to this day, Taan Noodles tweeted that it had closed it doors for good.  That was a bit premature and Taan immediately reopened with a new chef, Michael Than.

Taan which opened in October 2011 was known for its sake, steam buns and okonomiyaki, a Japanese-style cheese pancake.

But Taan always played second fiddle to the renowned  Sakuramen down the road.  Finally after this weekend, we’ll have one less Ramen place in town.

On Monday, June 30, Taan  Noodles will close its doors for good according to owner Ahmed  Ouihman.

Cashion’s Eat Place   a seasonal American restaurant with daily-changing menu has taken over the property and will likely expand.   RUNINDC reached proprietor Justin Abad late Sunday afternoon and is awaiting response on their plans.

“I will miss the okonomiyak,” says Alex Saify, an Adams Morgan resident.  “It was amazing — just like it was in Tokyo back in 2010.”

To our wonderful patrons and ramen lovers, we’re sad to announce that Taan Noodles has closed.  Thank you for all your support over the last couple of years.  We will miss the wonderful community of Adams Morgan.