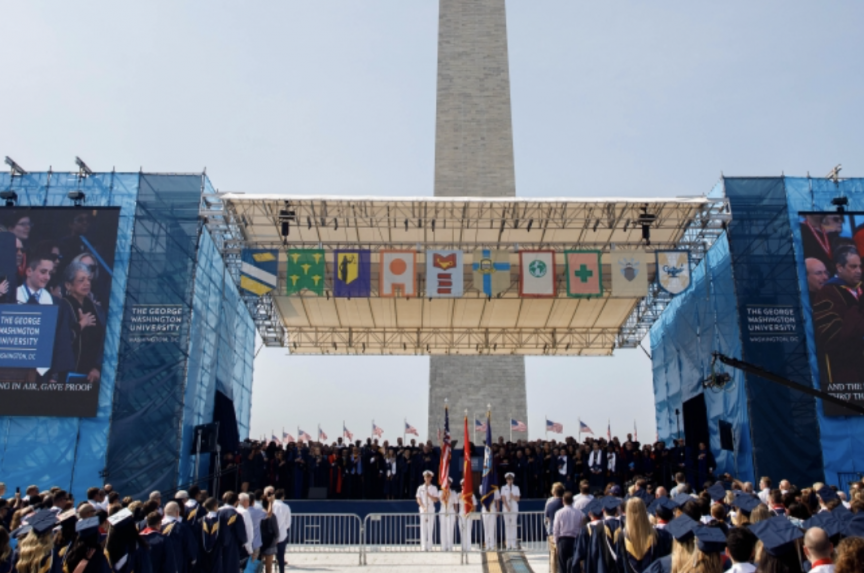 Commencement week at the George Washington University begins Tuesday with a week of events celebrating the achievements of its graduates culminating in the university-wide 2022 Commencement ceremony on the National Mall.

It is the first in-person Commencement held in its traditional time slot at the end of the academic year since 2019. The Class of 2020 and 2021 celebrated on the National Mall during GW’s Bicentennial Celebration in October.

The week’s notable events include the individual celebrations for all 10 GW undergraduate and graduate schools, a senior class toast and doctoral hooding ceremonies.

The university-wide Commencement ceremony is Sunday, May 15. Watch a live stream of Commencement and the individual school ceremonies online starting May 12.

Dual alumna and Olympian Elana Meyers Taylor, B.S. ’06, M.T.A. ’11, HON ’18, will deliver the Commencement address for its expected 31,000 registered graduates and guests on the Mall near the Smithsonian Castle.

By winning both a silver and bronze medal in bobsled during the 2022 Olympic Winter Games in Beijing, Meyers Taylor became the most decorated Black athlete ever in the Winter Olympics with five career medals. She is among the inaugural group of GW Monumental Alumni and became an honorary Doctor of Public Service in 2018. She will also be receiving the President’s Medal at the ceremony.

Meyers Taylor is an advocate for sports and equality for girls through her work as former president of the Women’s Sports Foundation. She holds many honors, including being named her sport’s Athlete of the Year four times, receiving the Athletes’ Choice Award twice, and being asked to carry the U.S. flag in both the opening and closing ceremonies of the 2022 Winter Olympics. She recently spoke at the White House when President Joe Biden honored Olympic athletes.

George Washington President Mark S. Wrighton will award honorary degrees at the ceremony. This year’s recipients are political journalists Dana Bash and Chuck Todd, both of whom also are members of the inaugural group of GW Monumental Alumni.

Based in D.C., she covers both campaigns and Congress and regularly serves as a moderator for CNN’s political town hall specials.

She has played a key role in CNN’s coverage of every presidential election since 2000, when she traveled extensively with former Vice President Al Gore during the presidential primaries.

Todd, who attended GW from 1990 to 1994, is NBC News’ political director and moderator of Meet the Press, the top-rated Sunday public affairs program in the country.

He also serves as a primary anchor for the network’s primetime political and election programming, co-moderating two presidential primary debates during the 2020 election cycle while spearheading NBC News’ political coverage across all its platforms and flagship news programs.

Todd previously served as NBC News chief White House correspondent, where he traveled around the world with former President Barack Obama and reported on the main pillars of his presidency.

Bash and Todd are members of the School of Media and Public Affairs National Council.

This year’s student speaker is Vishva Bhatt, a graduating senior majoring in international affairs concentrating in security policy and environmental studies while minoring in Arabic. She believes GW students are bound together by their hope and commitment to helping make the world a better place, each in their own way.

All guests, regardless of vaccination status, will be required to wear a mask for all indoor events.

In addition, guests aged 5 and over visiting campus must attest that they are vaccinated, or if they are unvaccinated, attest that they will show proof of a negative COVID-19 test within 24 hours of their visit. Primary registrants will attest on behalf of their guests at registration and will be asked to provide their registered guests’ proof of vaccination or a negative COVID-19 test upon check-in.