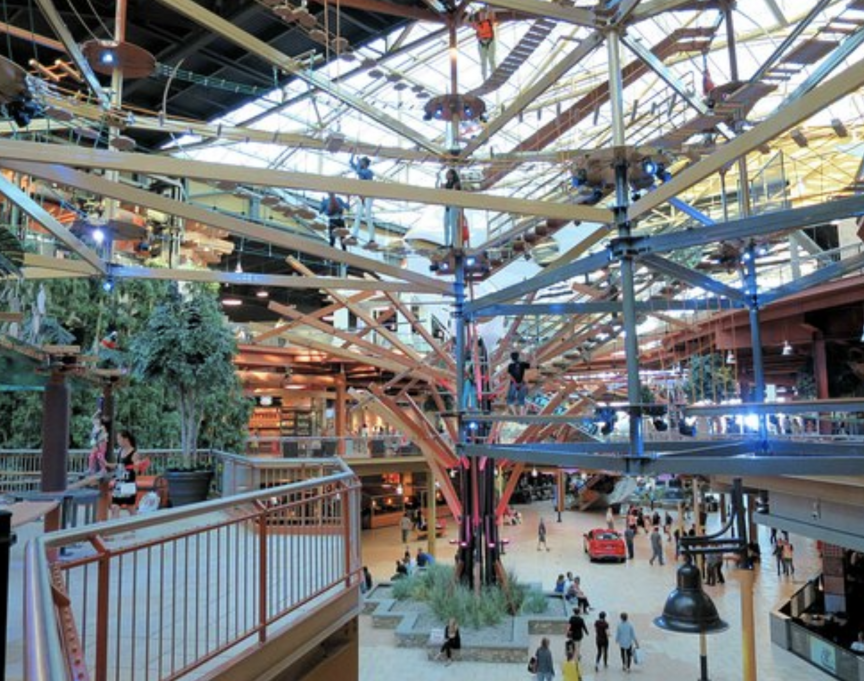 Destiny USA in Syracuse, a six-story shopping and entertainment complex on the shore of Onondega Lake.The 2.4 million square foot mall is the nation’s sixth largest shopping mall and is owned by Pyramid Companies who owns 17 properties mostly in New York.

The site of Destiny was originally a landfill surrounded by dozens of oil tanks called Oil City. Pyramid faced many challenges and delays since the site is a brownfield cleanup site. With a 1990 opening, the complex began to grow with a shift towards a mix of retail and entertainment in the mid 2000s. In 2007, they began a 875.000 square-foot expansion to add the entertainment complex

With RPM Raceway, it’s the closest thing to NASCAR in Syracuse.

Destiny USA is a very bold real estate project during a time when malls are struggling to survive.
The population of Syracuse and Onondega county has stayed the same since construction thirty years ago and the unemployment at 4.7% is higher than the state’s 4.1%

Shoppers today are more attracted to public market places than enclosed malls.  Apparel stores have shrinked in size and many shoppers choose to purchase online and quickly pop-in to a local store to pickup.

Young people who once socialized in malls now chat with their friends online while gaming or on social media. Still Destiny has been able to draw 26 million visitors a year, making it the top retail driver in Central New York. The parking lot is always crowded and some of the restaurants can get busy. Last year and 200 room Embassy Suites Hotel was opened just across the street with a walkway to Destiny.

Destiny owners are hoping that virtual reality and fitness-based entertainment like laser tag and canyon climbs will be popular with young people, the saving grace that takes them out of life support into a thriving, experience-based destination.

Occupancy rates though have dropped from 97% in 2014 to 89% today. And that is why Moody’s just cut the rating on the mall-backed debt to junk and assigned a negative outlook.

Still Pyramid Companies are not giving up. They’re adding new retailers — Lego will be opening this summer.  They were able to secure a loan extension this May and will negotiate hard to stay alive.

What rose from a landfill thirty-something years ago hopefully will not fall victim to the same fate – that would not be the right destiny.

Today, Destiny is doing all it can to welcome people back. It initiated a program called Fearless Steps Forward: “No dues, no bad weather, no equipment” – where walking all 4 levels = 3 miles.