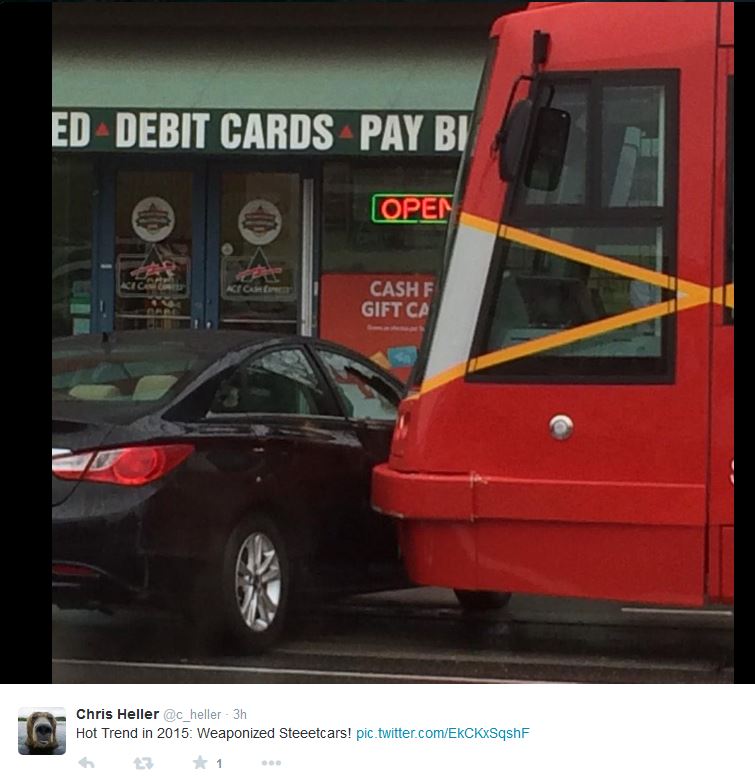 Forget the empty promises that DC made to current and considering business owners along the 2.5 mile stretch on H Street. The $3 billion streetcar project would be an economic boost to hundreds of restaurants and stores shuttling happy-go-lucky customers who converge on the multi-modal Union Station exiting from metro, bus and train. Additionally a second phase would carry passengers all over the city and as far west as Georgetown — a neighborhood that is in dire need of more public transportation options. It worked for Portland, why wouldn’t it work in the Nation’s Capital? Adrian Fenty made this grand pitch as part of his campaign promise. But the Trail Blazer City with it’s flourishing arts community and neo-hippie culture is also on a different coast with drastically different geo-economic priorities. For one, they don’t experience some of the traffic that we do.

But DC Metrobus and the ever-reliable Circulator have been faring well with strong ridership and a good track record. Why replace the more agile bus line with fixed tracks that share space with other vehicles, are hugely expensive to build and require constant maintenance. Everyone knows that the bus is faster and by putting streetcars in their way, you’re just gonna slow them down.

According to Dan Tangherlini, the former DDOT director under Mayor Anthony Williams, the tracks “give a sense of permanence, and that encourages long-term investment.” Rails have a good psychological effect,” says Tangherlini, “because you know where it’s going.” And, according to a 2003 WMATA survey of non-bus riders, this is a big deal: 30 percent of the survey respondents said that “better information about the services offered” was one of the most important improvements WMATA could make to its bus service.

Yes, a bus could take an unexpected turn, but that could be good if there is a vehicle in its way. Streetcar tracks reassure riders that they’re on the right route, but a parked car or crossing vehicle could obstruct the streetcar while a bus could easily move around it. Since the tracks opened for testing in October, the streetcars have been involved in nine minor accidents, causing no injury, little damage, but a lot of frustration.

In addition hundreds of vehicles have been ticketed and towed because they were illegally parked or did not park within the designated white line which could lead to a collision with a street car. The parking limitations themselves are a cause for many people to avoid driving to H Street. And in Portland, Seattle and Toronto, there’s been a rash of accidents from bikers getting their tires caught in the tracks and falling headfirst on the pavement. So another unspoken impact of the streetcar project could be less bikers and more congestion.

Eventually these kinks could be all worked out, but will the passengers come aboard? If all that the streetcar does is carry tourists and commuters from on top of the hill by Union Station 2.5 miles to the eastern end of H Street, then perhaps not — not when there are many other options for transportation, not to mention Uber, Capital Bike Share and of course the good ole fashioned metro bus.

Meanwhile the city would have to expend a lot of money maintaining the streetcars and tracks which has no future beyond H Street and thus no attraction for riders who would opt for the more reliable express bus or just hoofing it — after all with all the new businesses in the corridor, there are now more places to visit along the way.

So the city attracted a lot of new businesses to H Street due to the allure of the sleek and glitzy streetcars — only to eventually realize its grave mistakes and the fact that the money could be better spent elsewhere.

Already the city has expended over $200 million, a large portion of it on the failed tracks that run from the Anacostia metro station to Joint Base Anacostia Bolling. This was an illogical decision since on one side of the tracks was a freeway and another a military base.

Face it, the streetcar project arrived at a time when it was a huge fad and DC, bristling in economic prosperity, eagerly jumped onboard. But soon, with poor planning and weak oversight our streetcar project evolved into a huge boondoggle, arguably one of the worst transit projects in the United States. Let’s cancel this fiasco of a project before we spend another dime.