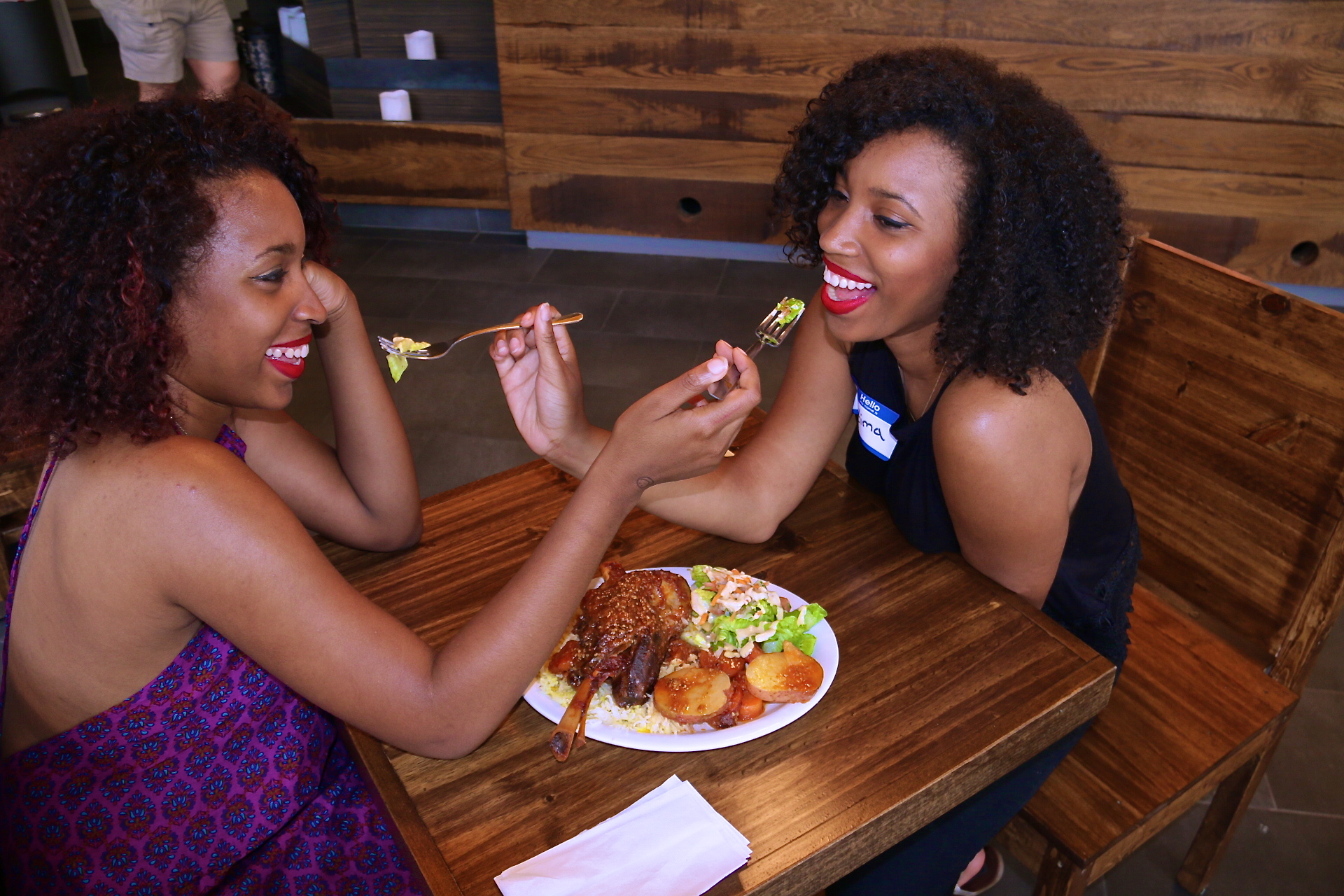 What a treat! You simply can’t beat five lovely restaurants in the heart of Arlington for only $40 per person. A play on those fun Pub Crawls that seem to be happening everywhere these days, the Clarendon Food Crawl, took lucky participants on a culinary tour of Ireland, Italy, Mexico & El Salvador, the Mediterranean, and Asia. Hosted by RuninOut and Social Group DC, it was well worth the time and money spent.

The group started at Ri Ra Irish Pub. I must say this was probably my favorite eatery of the bunch. The decor was amazing as it was was built from authentic Irish Salvage materials some dating back over 100 years. And the food only added to the experience. We were served an excellent fish and chips accompanied with tartar sauce, a slice of lemon and as is traditional in Ireland, malted vinegar. If you haven’t tried this lightly breaded treat with both malted vinegar and lemon you are missing out. The cod was cooked perfectly, flaky and wonderfully moist, inside what I assume to be a nice thick beer batter. The chips were hand cut and pretty good as well. I felt the need to add a bit of salt to mine but if you like them a little more mild feel free to go without the added sodium. You won’t be disappointed either way. This establishment also offered our group $3 Heinekens to wash down the lovely pub staple. All in all I give it 5 stars.

Next, we traveled to C

larendon’s little slice of Italy right next door at Faccia Luna. We were greeted with a huge buffet style meal of pizza and salad. The options for a slice of pie included Pepperoni, Cheese and Vegetable all on a properly cooked thin crust. The crust had just the slightest amount of crisp on the very bottom but otherwise was soft on the inside. I was very pleased to find they didn’t cook their pizzas to the point of being crackers with toppings as some places are wont to do. As for the toppings, I personally find it a touch too greasy, but it was still enjoyable nonetheless. The Italian salad was an excellent complement to the pizza. It was obvious the ingredients were fresh and the accompanying choices of Balsamic Vinaigrette and Ranch went well with the iceberg, radicchio, mushrooms and shredded mozzarella. Like Ri Ra, Faccia Luna’s decor was classy and gorgeous. I say it is probably worth visiting for the ambiance and if you thoroughly enjoy a slightly greasy slice of pizza with a nice fresh salad.

The third stop on our trip through the various nationalities of food along Washington St. was Mexicali Blues. Mexicali boasted the largest patio seating on the block and it’s own charms such as the Coronita, an original mixture of a margarita served with a Corona held upside down inside the ‘rita.

Basically as you drink the margarita the corona will replace the missing liquid. While the Coronita was not one of the drink specials afforded the group, it was quite special and is on my list of things to try the next time I visit this locale. The special extended to the crawl was $3 draft beer. I tried it and liked it well enough for beer. I would probably drink it again even, which to me says beers lovers would delight. On the inside the restaurant boasts plenty of seating as well. This is most assuredly a great place for large get-togethers if you are in the market for a great place to have your next big party or event. The decor was a good mix of traditional Hispanic colors, paintings and artifacts such as the Bull head mounted in the corner, pottery and day of the dead painted skulls. Each person got a plate of the Yucca con Chicharron. The yucca which is a plant native to Central and South America was lightly fried but not well seasoned in my opinion.

The yucca root has a taste and texture similar to potato yet marginally more sweet. It was cooked to a nice doneness where the skin was refreshingly crisp and the inside still soft. Naturally it is very mild and I felt a touch of salt would not have hurt this side dish. My fellow table-mate at this event said traditionally he thought it was caramelized a bit more but not salted. That would have worked also in improving the tame taste of yucca.What did save the side dish was the outstanding horseradish sauce. I cannot say just how much I love horseradish, I swear I could eat it raw. For those not quite so fond of this root don’t despair, Mexicali Blues’ offering is light enough to please any palate. The cabbage salad that came with our small plate was lovely, crunchy and spicy but not overly hot. Lastly, the Chicharron was less than optimal. The flavor was spot on, savory with plenty of spices blended in the sauce it is simmered in. The pork however was simply over-cooked which is a shame because there is almost nothing as good as a succulent bite of pork. I can’t write this place off entirely based just on the food sample, and am planning on a return trip at some point if for no other reason than to get a Coronita.

fourth restaurant on our list, we were served family style – one huge platter per table. Located right across the street from Mexicali Blues, this minimalist deli-style corner spot has limited indoor seating but their shaded patio makes up for it. For our meal there was a choice of roasted chicken or salmon served on extra-long grain rice, with sides of potato or carrots, and salad. The roasted chicken had a good full flavor with just enough lemon and olive oil. It seemed like it may have sat just a tad too long on the heating tray but was tasty regardless. The salad had a nicely piquant mustard, olive oil, and oregano vinaigrette on crisp, fresh romaine, and the rice was seasoned with saffron and tasted wonderful yet simple. As for the carrots they were tender but not complete mush and tasted as though they came from a farmer’s market. The salmon dish was the better dish to me in all honesty. It was cooked just enough, it was luscious, not at all dry, despite sitting smothered on a chaffing dish prior to plating. The combination of herbs and olive oil were absolutely deliciously infused into the delicate flesh of the salmon. And I cannot forget the potatoes as they were my favorite side. They were delightful, fork-tender all the way through and had been simmered in a mellow but delectable tomato-based sauce. These bites of potato just melted in your

mouth they were so good! And to top it all off, the owner of Spice, Yasser Mohamed, gave partakers of the crawl 50% off ice cream at his other establishment, Larry’s Ice Cream. While only one person of the large group took advantage of the offer, I heard it was well worth it for the green tea ice cream. Mmmm, sounds wonderful. Overall, I highly recommend visiting Spice the next time you happen to be in Clarendon. You might even see me there as I plan on going back soon.

The final big blow-out was at Hunan One, right next to Spice. The inside is enormous with ample bar seating, plenty of booths, as well as tables and bar-stool islands near the windows that can accommodate groups of all sizes. Starting with the bar they had a good list of beers and wines presented at nice discounts for the Runin Out crowd, their usual happy hour specials during the week. We got half off wine bottles, pints at $5.50 and $4.75 rail drinks. I split a bottle of a lovely White Zinfandel with Angela that went well with our samples. As is my tradition, I tried the hot sauce first. It was a spicy chili sauce which delivered a medium-hot level of heat but didn’t kick me in the mouth.

The spring rolls were light, fresh and delicious, however, the sweet and sour sauce was more sweet than sour. My only real let down was the crab rangoon which was a little toothsome and seemed as though it had come from a frozen bag instead of being freshly made. Also it was overly sweet causing me to wonder how exactly they got it that sweet. Finally the chicken wings were exceptionally seasoned with five spice and were delectable! A thin layer of crust on the outside and perfectly done and juicy on the inside, they make my list of dishes to return and have more of in the future.

On the whole, the Clarendon Food Crawl was a big success. The tour explored both familiar and new, agreeable experiences. Friends were made, good food and libations imbibed. As a result, I am looking forward to the next Food Crawl Runin Out DC is hosting. I’ll be there with a smile on and in the thick of it, wherever it may be. I am hoping it will be in DC next time. See you there.

Annamaria lives in Alexandria, Virginia having recently moved to the DMV from Ohio, and you could say she is a jack of all trades. She critiques local food and drink, mystery shops, writes and creates her own gorgeous knitwear. In her spare time she can be found at the pool or visiting one of her favorite watering holes in NW D.C. Twitter.com/meinemaria