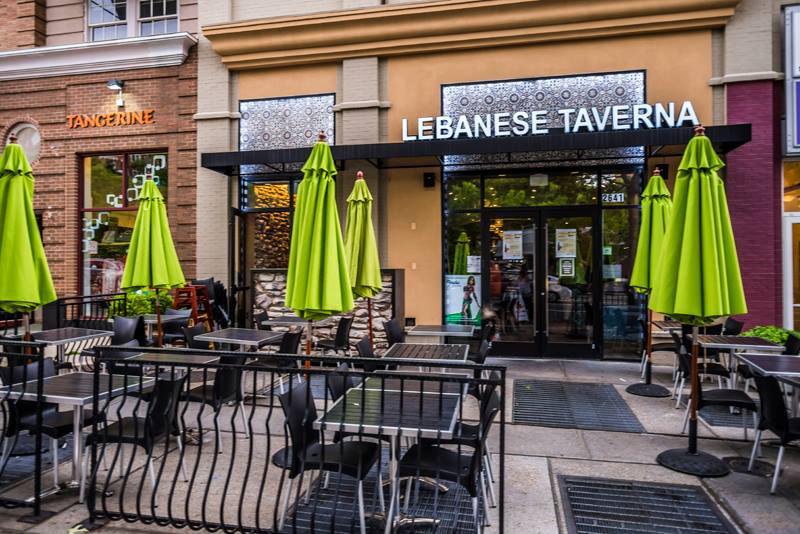 Lebanese Taverna, a staple in the Metro Area, is synonymous with the best hommus in the city. When I told anyone I was writing this blog the first thing they would mention is the perfect consistency and flavor of the hommus. I am a huge fan of hummus, which is the way I always thought it was spelled but ‘when in Rome’ so from now on it is hommus.

My first visit in Woodley Park for dinner was absolutely wonderful. I walked into the restaurant and felt like I had left Connecticut Ave and Woodley park and was transported somewhere else. The restaurant is decorated modern with a touch of the history from which its name is derived. The owners opened their first location and could only afford half a sign. They left the Taverna portion of the original sign and added Lebanese in front and so the name was born. The atmosphere is serene with clean lines. The seating is comfortable and you do not feel like you have to be dressed up even though the tables are dressed with white linens. Anyone can come into this establishment and feel welcomed.

Charlie, the GM, was polite and welcoming. I brought my friend Amanda along to sample the foods with me and she had a grin on her face the entire time

we ate. We started out with the Chefs Platter that included a great mix of all of the things that make Lebanese Taverna famous. Of course the hommus was amazing. It was thick not runny in anyway.

I knew instantaneously why everyone was raving about it. They drizzled a bit of olive oil on it and even though it is such a simple item it was basically, luxurious. The other items were Lebnah, which is a thick Greek yogurt with, spices… um yum… I think I have only had Greek yogurt with sweet toppings this was a nice change of pace.

Then the Taboleh is another classic item whose special flare is the addition of pomegranate seeds added… yum again. As you can see I was eating like it was a competition. I think I could have won a T-Shirt for finishing an eating contest and I hadn’t even ordered dinner yet. Next we had the Msaka, which is chilled with eggplant and tomatoes. The Msaka is mild and full flavored if that makes any sense. This one was something I had not had before but I loved it and did not let my dinner companion have much of this. We ate everything on their house made pita bread. I could not tell you how many baskets of bread we had. I am glad I did not count because I would be embarrassed.

There is more to the Chefs Platter and if I would have known how much I was going to love everything I could have written this blog on the platter alone. There were a total of 9 items I will hit a couple more and move on. Basically order it, share it, hoard it and enjoy. The falafel was on the platter as well and of course it did not disappoint. Ms. Amanda smiled and looked at me and said ‘best falafel in DC; People need to stop going to Adams Morgan late night and eat the real deal’ and she was right. Never again will I settle for a late night rushed falafel. Obviously this blog is becoming a bit of a book but I am trying to paint a picture for you all. The Babaganoush and grapeleaves divine and then the Fatayer spinach was consumed with haste. The flakey pastry and the spinach filling were melt in your mouth good. I even think my friends who do not like spinach would enjoy this take on it. For real move on to the main course I can hear you saying. I am making myself hungry and may have to go back to Lebanese Taverna right no

Before I get to the main course I want to introduce you to our server Gabbie who guided us through our meal. She was not invasive or pushy but knowledgeable and willing to help if she was asked. We wanted to make sure we tried everything we could so her guidance was much appreciated.

With our meals we took Gabbie’s recommendations. I tried a Lebanese red wine blend and Amanda had the For Figs Sake (yes all the drinks have fun names). My wine was very well balanced and went well with everything I was eating. It is hard to pair red wine with such light delicate food but I feel this worked well and did not over power anything. The For Figs Sake is a popular drink and Amanda called it a ‘fruit explosion’, I had a little sip and could taste the licorice undertones of the Lebanese liquor and the figs complemented it well. Definitely a drink you could accidently have a few too many of.

we tried the Sea Bass and Mixed Kabob entrees. The sea bass was fileted at our table after being cooked whole. The outside of the fish had herbs but the fish held its flavor. Once again the food was balanced, well cooked and the seasoning did not get in the way of the flavors of the fish but brought them out and complemented them. It came with a mixed herb sauce that I poured on all of the food I was eating and asked for when I went to lunch in Tysons (foreshadow). It was paired with perfectly cooked jasmine rice, peppers and squash. I somehow found the courage to work through the meal even though I was obviously full after the appetizer.

The Mixed Kabob is a classic that is always recommended when someone wants to get a taste of the restaurants flavors. It came with Kafta, a mix of beef and lamb 60/40 split, lamb, chicken and a mix of vegetables including mushrooms, tomato, zucchini, onion and pepper. This entrée also came with a sauce for dipping. The sauce was not exactly a sauce, maybe a dip. It is olive oil, garlic and lemon juice whipped. It had the consistency of fresh whipped butter. Yup, that container was empty of its contents by the time we were done with it.

At this point we were stuffed and smiling. No room for desert and no thought of it. We had destroyed everything that was put in front of us. I love to eat and more women should just eat and enjoy it. So good. MMMM. Now I am really hungry. So all in all the pleasure that was mine was tasting and experiencing Lebanese Taverna. Charlie, Gabbie and the whole crew were amazing and I will go back…Again and again. There are more things to taste and I need to know them all.