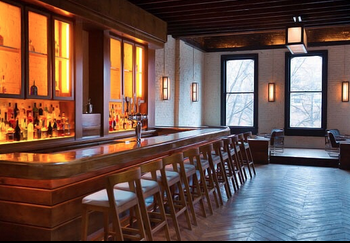 We certainly miss the Pour House, but probably not as much as the DC Gators. After moving out shortly after the NCAA Division 1 Championship, they settled down at the old GWU hang-out McFadden’s. McFadden’s became the new local swamp until a bar fight and stabbing led to its closure right before New Year’s.

Gator fans and Capitol Hill denizens rejoice — a more classic American cocktail bar has taken over and will be opening its doors this spring.

The glitzy 3-story Stanton & Greene on 319 Pennsylvania Avenue with its artisan spirits and historical decor will be a welcome addition to Capitol Hill’s boozy and promising nightlife scene.

And best of all, the owners, longtime fixtures of Capitol Hill run upscale Sonoma Wine Bar just a block away.  Would say Welcome to the Neighborhood, but hey, you’re already here.