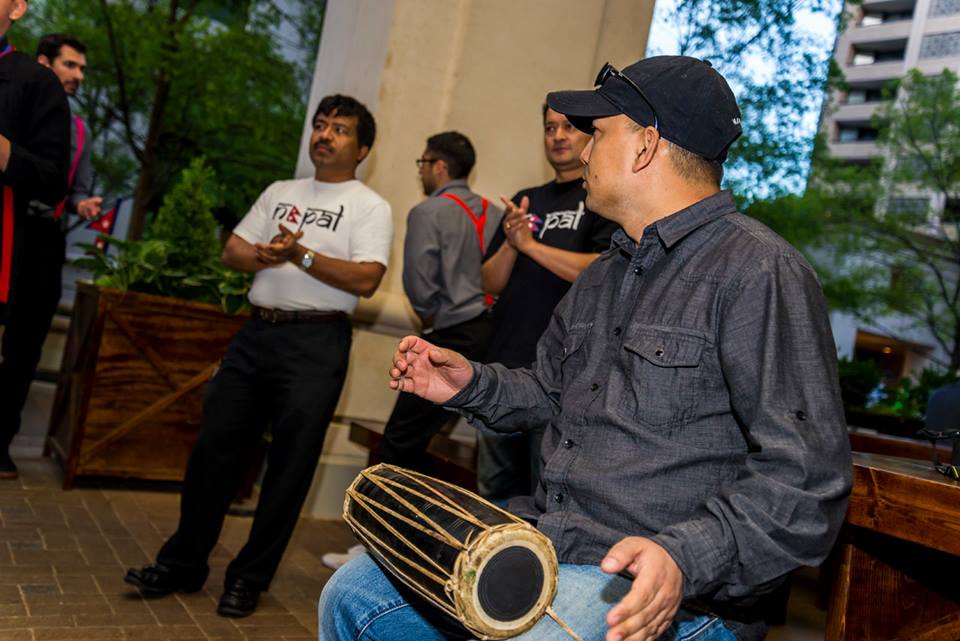 Serendipity works for love, but it also may work for charity.
Last weekend, 70+ runners ran through DC to raise money for Nepal, raising the iconic red and blue pennants of Nepal Starting in Van Ness, the run ended after 13 miles in Georgetown. And that’s when Sunita Amatya noticed our flags and our team celebrating our run at Mr Smith’s. She immediately invited us to see her son, Sudin play his saxophone while raising money for Nepal relief. We also met Ram Shrestha, the president of the Newah Organization of America (NOA).

Already we had raised $700 from the Run. We were also planning another fundraiser the upcoming week in Courthouse, VA for Nepal. What a perfect organization to raise money for.

So on Thurs, May 14, several of the runners and friends as well as members of NOA held a fundraiser at Courthaus Social.Courthaus Social was kind enough to provide mouth-watering appetizers.Jackie Woodbury from Bookalokal assisted with invitation and fundraising. People came from all around at a moment’s notice. And the event turned out to be a huge success.

After eating and socializing, we were entertained again by Sudin and Pushkir with native Nepali music and garb. The music carried powerfully through the outdoor patio, that many of the guests started asking what cause we were supporting — NOA was able to also receive some donations from those who were touched and wanted to support.

On behalf of NOA, we would like thank RUNINOut for organizing a fund raising program for Nepal’s earth quake victims and donating the check of $1,000 to NOA. We would soon mobilise local organization and people to help earthquake victims with your raised money,” said Ram Shrestha, president of NOA.

“I feel blessed to be a part of this amazing fundraiser,” said Margaret Westley. “It’s a great way to support people in Nepal and an awesome way to spend time after work with old and new friends alike.”