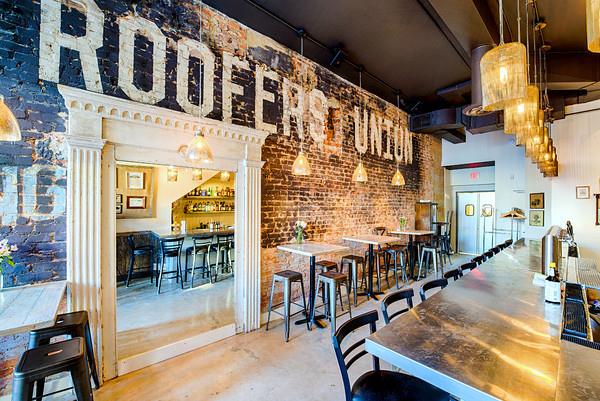 Roofers Union is a relatively new watering (and feeding) hole located at 2446 18th St. NW in DC in the building that used to be occupied by The Reef.  And if you haven’t been, you need to get there stat. The renovated inside is far from the dive bar vibe of the previous establishment.

The decor is casual, simple and to be honest downright comforting. The staff is very warm and welcoming and amazing at what they do. The big bear of a bartender, Frank, makes cocktails that will blow your mind.

The executive Chef, Marjorie Meek-Bradley, is simply phenomenal! There just isn’t a better word for her I swear. Her inventive American fare consists of homemade sausages and crispy pig ears on watercress.

While the first floor is smallish it doesn’t lack for anything in character, good company and excellent food and drink. There are two other floors which feature gorgeous views of 18th street in the heart of Adam’s Morgan, offer more space and additional minimalist decoration. But believe me you won’t be looking at the walls much when you are seated in the large middle floor dining area or hanging out on the rooftop bar.

First off Frank created this absolutely delicious concoction for the August DC Food Blogger’s Happy Hour. He threw together some Apple Gin, Apply Brandy, Apple Cider and brown sugar with slices of real apple. We affectionately named it “How ‘bout them apples.” I didn’t even have a clue Gin came in Apple flavor, and while it won’t convince me to start drinking Gin on its own I now know I can use it in some hard Apple Cider. In other news, the Roofers Union is celebrating local brewers in the month of August by only serving beers from DC, Maryland and Virginia. Go Local!

When the trays of food samples arrived I was more than happy with the freshness, quality and taste of the offerings. The chicken and apple sausage was served on a pretzel bun made in-house and with apple dijon mustard. The bun was nicely chewy but not tough and the flaked salt was perfect. But the sausage takes the prize. All the sausage as well as burgers are ground in-house. I for one could tell this was not your ordinary sausage, and was glad for it. Jason “FoodGeek” who co-hosted even remarked “it is the only pretzel bun I have ever liked.”
Next we were served samples of tiny bruschetta of melted taleggio cheese and apple chutney. These were the only dish I had any real issue with. Enjoying a good thick slice of bruschetta where it manages to be both crisp on the outside and soft on the inside, I was not impressed with the very thinly sliced bread as it was too crunchy and sharp in my mouth. Aside from that the flavor was great. Melted cheese and crisp apples, yes please! Also I think I must try more of this taleggio cheese I’d never heard of before yesterday. It has a slight tang to it that was complimented nicely by the sweetness of the apple mixture on top.

Another course was a celery root, apple and carrot slaw served in tall shot glasses. Despite my reservations about anything with mayonnaise I tried it. I wasn’t dissapointed in the least. The mayo was light and blended well with the buttermilk, apple cider and distilled white vinegar. The crunch to the vegetables, which were julienned of course, was just right. They had some movement to them so they weren’t offensive in scratching the roof of your mouth. The small flakes of fresh parsley and the capers I really didn’t get much of a hint of on my tongue but I was told they were in this dish as well. Overall it was a win in my book.

Lastly but not least of all were the bite-size apple pies. These are what a certain fast food restaurant that will remain unnamed wishes their apple pies were. Yet another win for Roofers Union and Marjorie in particular. Bravo! The crust was baked just right and had a lovely flakiness and butteriness to it that set off the caramelized apple and cinnamon filling in a flavor explosion of a lip-smacking bite.

If you have noticed a theme, you aren’t wrong. Apples were in every single dish as well as the punch. Thanks to Wendy Brannen from USApple for hosting this pleasant gathering filled with several appetizing and delectable culinary experiences. Do yourself a favor and check out Roofers Union for the food, for the cocktails, for the view. For whatever reason you will not be disappointed! I recommend a seat at the roof-top bar near the railing.