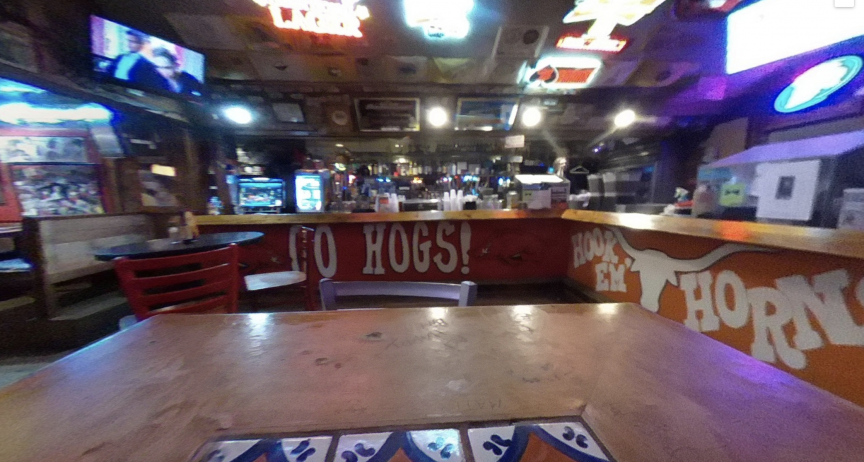 Texarkana, located in the Ark-LA-Tex region, is a town with a unique name that confoundedly straddles two state lines.

Considered one of Texas’ most dangerous cities, it had three Superfund sites since the 70’s earning its moniker “Toxicana, USA,” When Harvey blew through two years ago, toxic waste was washed up creating a deadly brew.

Knowing this and hearing the chilling tales of serial killers on the large, I would rather stay in my truck than to explore the town that dreaded sundown..

That standing lined up with my initial impression until I arbitrarily stumbled into Fat Jack’s, located on State Line Avenue. Even though this local sports bar has been serving Texarkanas for decades, it wasn’t listed on Google maps. That didn’t matter to locals, Fat Jack’s is an iconic institution.

As soon as I ambled through, I was greeted by a large, burly man with the stature of a linebacker named Billy Bob who checked my ID card and raised five fingers.

“There’s a cover tonight – we have a band from Memphis.” And sure enough it was packed to the gills.

The covered patio was decorated wall-to-wall with local memorabilia. A couple of local patrons in ball caps and blue jean cutoffs were busy shooting pool. A cloud of smoke drifted up to the corrugated tin-roof. Although I was overly dressed and an out-of-towner, I felt surprisingly warm and welcomed – surrounded by a dozen new friends who were happy to drink a toast with me or let me bum a cigarette for a story or a joke.

Unlike your average dive bars, Fat Jack’s serves real, wholesome cooking . It’s an oyster bar with a twist of Cajun, catering to locals and passer-bys driving south from Memphis or north from Dallas who heard about it from their neighbors or their in-laws, many for generations.

They love the Arkansas Razor Backs and cheer for them during every game. Even college baseball is watched religiously like it was the Majors. And they pay homage to their alma mater with a large boar head greeting loyal fans clad in red and cardinal.

I approached the bar – one side in big bold letters: “Go Hogs”, the other side: “Hook Em’ Horns”

“We’re known for our oysters, crawfish and jambalaya,” said Joseph, a friendly bartender who offered a warm handshake and a lazy smile.

“How are the gator tots?”

“They’re the Bomb – If you like seafood, you should try the trifecta: shrimp, oysters and gator?”

I sat down, my table was weathered and people over the years had written on them with sharpies. I continued to enjoy my drink while soaking in the atmosphere. A baseball game played in the background. An older couple were playing foosball – this bar game sure ain’t what it used to be as I watched with passive amusement. Before long, the smell of fresh jambalaya hit me right in my nostalgia, bringing back drunken moments on Bourbon Street.

I gleefully devoured my meal – pan fried and searing – the oysters were lightly breaded and juicy. And the morsels of gator meat were tender and chewy – a perfect combination.

My dirty rice was brimming with fresh sausages and the slow cooked baked beans simmered in its juices – it was simply the most amazing Cajun casserole I had outside of the Big Easy.

Black and White photos of life and living in the heartland adorned the walls. A collage of Jack Mills, aka Fat Jack plastered another wall. “RIP – January 2015” – he was a local legend. At the bar, both Shiner Bock and Red Bone were flowing freely from taps into frosty beer mugs that went down just as quickly as they were poured.

There was a Country Western band playing that night. The artist picked his Gibson acoustic strings like he was Johnny Cash reborn. His voice had the sweet, scratchy sound of Hank Williams. I was captivated, enthralled and purely entertained.

I could pat myself on the back for giving it a shot. My palate was content and I was soundly wrapped in my elements. Once again, I learned not to judge a town by first impressions. There is much life after sundown in Texarkana and as I sipped my Shiner chased down with a shot of hickory smoked whiskey, there was nothing better than the rhythmic sound from a honky tonk strumming listlessly away.