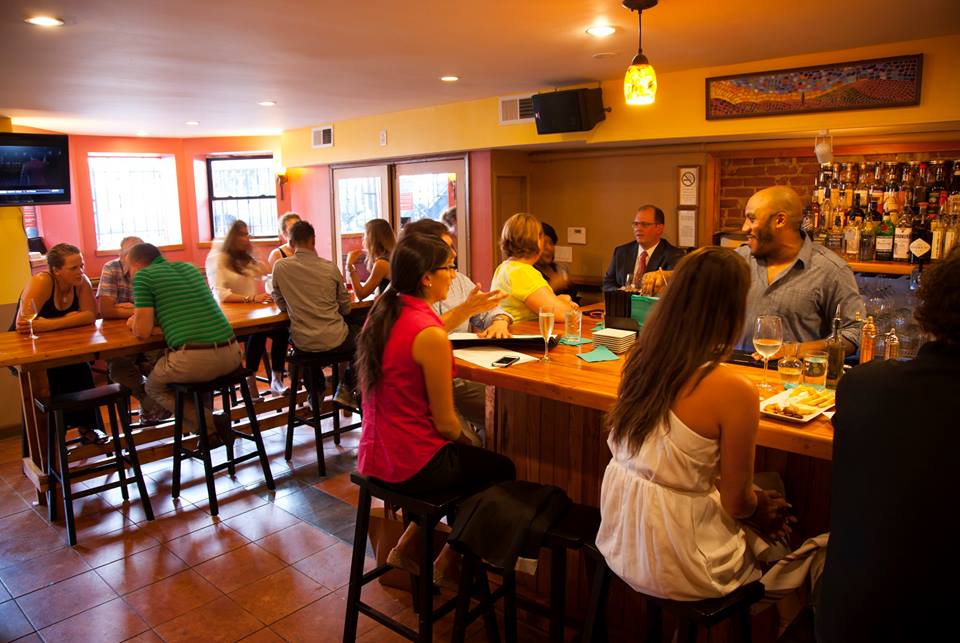 Dino’s Grotto is located along the happening U Street Corridor at 1914 9th Street NW in DC. Touting itself as a Rustic Italian Restaurant it definitely is that, and more. They offer great Happy Hour Specials every day at price points of $4, $6 and $8 which include excellent house wines and prosecco, and if you are peckish they have great appetizers like the Tuscan Bacon pork belly with grilled peaches.

I’ll talk more on those later believe me, but for now I’ll focus on the venue. The lower dining area and bar is on the small side and the decor very simple with plain wood tables and chairs and sparse decor. Instead of focusing on what is on the walls Dino’s staff makes you feel so much like family that you don’t really notice how Spartan the surroundings are. That is a rare thing in the restaurant world, or at least my experience of it. So if you enjoy no-frills but great service and excellent food this IS the place for you.

Dino’s recently hosted the DC Food Blogger’s monthly get-together and in style. The appetizers were laid out in a buffet on wood carving boards with hand-written labels identifying the food. The spread included a platter of roasted vegetables including eggplant, radish, carrot, beet and onion. There were also boards of various pates, a selection of rich cheeses, brown sugar glazed almonds, and breads with several accouterments such as Sriracha anchovy aioli, anchovy caper salsa verde and apple mostarda. I appreciated the simplicity of the the self-serve offerings I just wish I had tried everything offered but alas could not. What I did try though, was good, if not great.

I did sample the cheeses naturally. It is my favorite food group after all and if I could have only one thing while stranded on a desert island it would be cheese, well and maybe a fridge for the cheese. Moving on from my fantasy world, the choices of cheese were Blu di Bufala, Blue Erbonnato and Pecorino Tuscano. The Blu di Bufala was a wonderful blue cheese, piquant but not too strong with a nice finish of blue granules melting on your tongue. The Blue Erbonnato was sharp and creamy without the veins of blue throughout but with a stronger flavor to it than the Blu di Bufala. The Pecorino Tuscano had a nutty flavor and a hint of tanginess to it as well that was a pleasant contrast to the other two cheeses. I always enjoy trying cheese I haven’t had before and all three of these qualified. If like me you are a turophile, you should swing by Dino’s Grotto and see what cheeses they are offering. I am sure you will find something well worth trying.

Next I sampled the antipasti of vegetables. The eggplant was served pan-roasted with thin slices of garlic and herbs which I thoroughly savored. The aleppo carrots were julienned and served cold with a tangy grilled lemon sauce which was tasty. The radish while not my most beloved vegetable of all time, was actually worth the try both managing to be crisp and flexible. It was marinated in ginger, lemon, and salt that made me like this part of the dish more than I thought I would. The candied onions were very piquant due to being pickled but were still nice. The beet, also pickled ,was not as tart but instead it retained its sweetness and again surprised me with how much I enjoyed it. I think fans of beets would agree Dino’s has a winning recipe for theirs.

As the evening progressed the legendary Dean Gold brought around samples of hot from the kitchen dishes, including the wonderful Tuscan Bacon with Grilled Peach. The peach was luscious and juicy as well as perfectly ripe. The bacon was a chunk of pork belly with the fat charred just as I like my fat to be on meat. Unfortunately the pork was a little well done for me which is not an uncommon problem with pork so I could forgive it seeing as the overall the bite was pretty satisfying. The union of the nectarious peach with the crunchy fat and finish of pork was nearly sublime. The lovely gentleman server next brought around Trotter Tot’s, this marvelous breaded potato croquette of pork shank with mozzarella and gravy for dipping. It was spiced nicely, with a touch of heat that blended well with the savory pepper gravy. These little skewers were crisp, filled with a warm and delicious mix of ingredients that simply put worked for me, especially once dipped in the gravy. I mean who doesn’t love a good gravy, right?

Aside from the array of snacks offered especially to the DC Food Bloggers by Elly Shariat, there were a multitude of pickled veggies in jars across the bar available for anyone willing to eat them. The green tomato was very tart, mouth puckeringly so. It had a kick of spice at the end after the vinegar was done which made it worth the taste. The pickled carrot was similar aside from the carrot adding a sweetness that counteracted the extreme tartness. Lupini beans were the mildest as far as the amount of vinegar and I found out from the bartenders (Fabian and John) that they have a natural spiciness to them. They were very firm, toothsome even, but my still one of my favorites of the pickled choices. Along the shorter side of the bar there was also a huge jar of Kalamata olives that I almost missed. Good thing too, by the time I found them I was damn near full, otherwise I might have finished off the whole jar by myself.

Entrees are served with a complimentary bread basket of sourdough and whole wheat chunks. The multigrain was toothsome with whole grains baked in and had an appealing flavor. The sourdough was actually pretty mild as far as sourdough goes. It made me think more of plain French bread than sourdough. Luckily I wasn’t making a meal out of the bread so the mildness of the sourdough wasn’t a huge issue in the end. Lastly, for dessert I had the apples mostarda which were simmered in a sauce of cooked down cinnamon and sugar, and cardamom. It was lovely. The cardamom gave it a bit of a twist that was extremely pleasant. It was a great end to the evenings fare for sure.

Dino’s definitely is very authentic when it says rustic, both the decor and the food shows they aren’t kidding about that title. Also the friendliness of the staff definitely makes me think of country folk welcoming me into their home to share a meal. That is an experience you really can’t pay for, luckily it is free with your meal, or drink if you are stopping by for happy hour. I for one plan on checking out more of their menu at a later date, as well as their drinks.