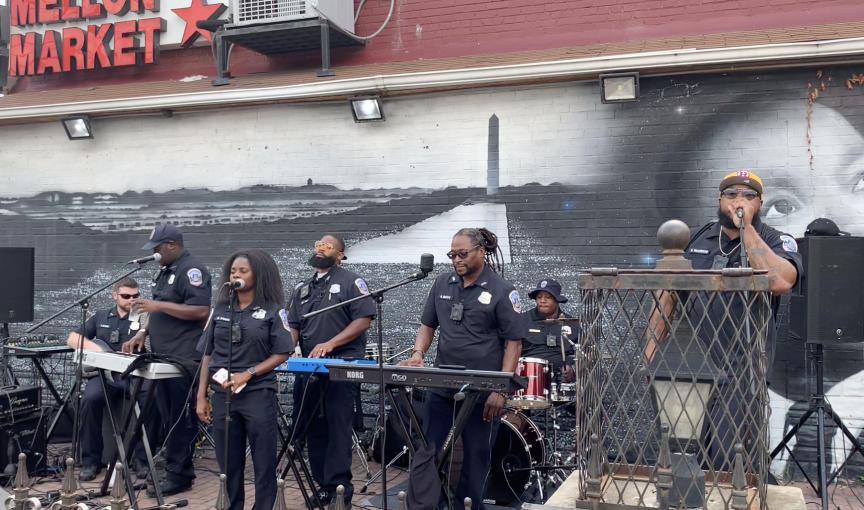 The Police were performing in Congress Heights, D.C. at Mellon Convenience Store, a day after a deadly shooting in the area. No, not Police the Band and this wasn’t a sting. It was the D.C. Metropolitan Police cover band named “Side by Side.”

The band has been in existence since the 1970s, but recently regrouped after many years in hiatus. They play at family-friendly events throughout the city, and after many deadly shootings in the area, it was a good time to show their presence in a non-violent way.

There, the officers teach students the role of police and show that officers are real people with real interest.

Carrying firearms as well as a pop rock tune, the eight officers perform all over the city with the goal of visiting every elementary school in D.C. during the school year. The band plays Hip hop, R&B, jazz, country, rock. They got their name not from their sidearms but from playing side-by-side with school programs. Their music is non-violent and its a perfect antidote to stories of police violence that is prevalent across America.

“It’s great to see that these police officers do much more than just patrol the streets. They are our neighbors, too. They have talents and interests, and they really do care about our community,” said Raymond Jones, a resident of Congress Heights.

“I’m very happy to support the police who ensure the safety of our business and patrons,” said store owner Ephrame G Kassaye