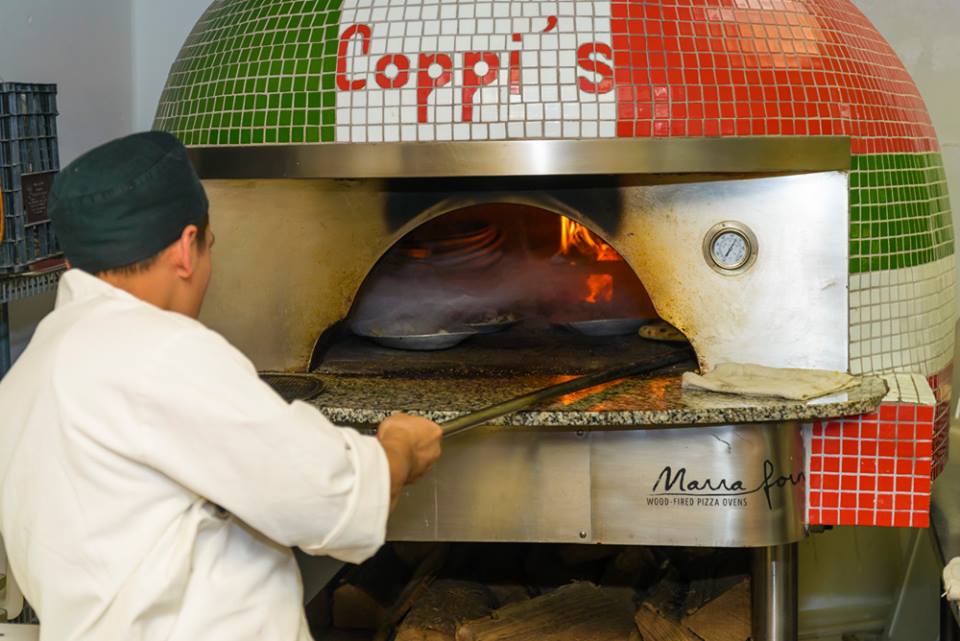 Their Coppi’s revival drink was simply amazing. Made with their own housemade tonic of Calendula, slippery elm, ginger, turmeric and pineapple, it was spicy and slightly sweet and packed full of great health promoting herbs and spices. Also the Sangiovese wine was a nice drinkable red that everyone agreed they enjoyed.

As for the food is was a mix of mouth watering, wonderful dishes. The sweet pepper salad with feta was wonderfully sweet with little cubes of feta mixed in that gave it a lovely bite of sharp flavor in contrast to the sweetness. The pan-seared green tomatoes with mozzarella however were a bit lackluster. The concept of layering the thinly sliced tomatoes with mozzarella in between and a light breading then pan-searing them instead of deep frying them wasn’t a bad one at all. The greens salad had delightful caramelized pecans and a smooth ricotta cheese mixed in it that was spot on. It was very tasty and you could feel and taste the freshness of the greens.

As one would expect of an Italian restaurant there were several wonderful pizzas to choose from including several vegetarian options. Though not vegetarian, the chicken pizza with orange peppers with dried oregano sprinkled on top was a  particular favorite of mine and lovely for a thin crust. Not overcooked like a cracker and still with a light chewiness that I  look for in a good thin crust. This thin crust is easily one of my favorites in town, particularly dipped in Coppi’s organic olive oil which I was told is how it is meant to be eaten.  The artichoke, eggplant and mushroom pizza was also very good. The eggplant was thinly sliced, not too greasy and slightly sweet. The artichokes were juicy and all the toppings with the cheese and nicely toothsome crust was wonderful.

Aside from pizzas they have great seafood including scrumptious calamari which was clearly fresh, cooked just until done and not rubbery at all which as any connoisseur of good seafood will tell you is a big no-no . I much prefer my squid served grilled to fried squid any day and this was done superbly. It was simple but very flavorful especially with a squeeze of lemon on top. I appreciate when a restaurant lets the true flavor of good ingredients talk for themselves as was the case with the Calamari. Next on the seafood tasting list was the monkfish that was fork tender but done well and seasoned with a slightly spicy red pepper sauce that was a great compliment.

Of course what would a true Italian restaurant be without homemade pasta? Luckily Coppi’s did not disappoint in this department either. The butternut squash ravioli was a bit sweet as one would expect but not overly so. The pasta itself was not too thick as many homemade pastas can be in my experience. Overall, this was a hit, I only wish I could have had more of it but i got there too late, missing out on the gnocchi as well. But if the consensus of the crowd was right, and the fact that the plate was cleaned out in mere moments, it is also delectable.

The deserts had to be my all time favorite of the samplings offered. The nutella croissants were fantastic, so warm, gooey and mouthwatering. I mean how can you go wrong with a freshly baked calzone stuffed with nutella? It is after all the food of the gods. Luckily i had tried the tiramisu first so the Calzone did not overshadow the deliciousness of this light and fluffy desert. With a hint of Chambord, instead of the traditional Grand Marnier, it was melt in your mouth good. And lastly but far from least their house special chocolate bread pudding with raspberry was also tasty, though I didn’t taste much of the raspberry. But the consistency was spot on, soft yet slightly firm,  creamy and super tasty.

I would have to give Coppi’s a solid A.  Everything was great — the atmosphere, the drinks and most assuredly the food. I say it is a must try, especially since it is organic.