It was the first day of EID.  The holy month of Ramadan had just ended and Egyptians were out in the streets en mass to reward themselves for the struggle that they endured for the last month.

After visiting the mosque to say a special prayer a special time of meet and greet provided with homemade sweets, many Egyptians went to see the debut of a new film downtown.  It was Oct 2006, and Egyptians were generally excited, but their energy was pent up and the steam valve had to be released soon or somewhere whichever came first.

But the film quickly sold out and mobs of angry men showed their disapointment by tearing down the post office.  After accomplishing this and with security not present, they decided to engage in a sexual frenzy and ran around grabbing and groping any women in sight.  It didn’t matter whether the woman were wearing a hijab or uncovered.

No women was safe.  Egyptian or foreigner.  They ripped off clothes and sexually assaulted on the street in front of thousands and in front of police who seemed powerless.

And the beatings and rape occurred for a brutal five hours from 7:30 pm to 12:30 am.  Yeah, the police was there, and the police just stared.

Thankfully many good Samaritan Egyptians came to the aid of the women. Shopkeepers harbored women inside their stores.  Taxi drivers locked girls inside the cars, but the angry mob still tried to break the windshield and get the girls out.  It was pure pandemonium.

And where was the news?  The event occurred with virtually no reporting on TV or in the papers.  No CNN.  It would have gotten totally unnoticed if it wasn’t for the citizen journalist who through social media channels came out to document this gross injustice.  Thankfully bloggers documented and reported the incident with vigor.  They provided pictures to the police officers who blatantly refused to take action.  They were afraid that there would be negative repercussions from their peers. 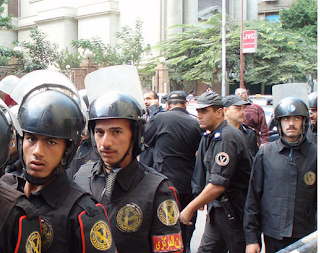 This act led to protest on the streets by bloggers, women’s rights activists and the common Egyptian who were sick and tired of the state police standing there doing nothing to quell violence. 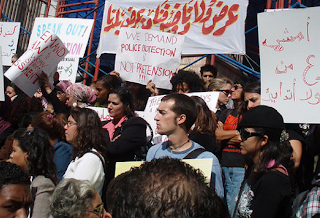 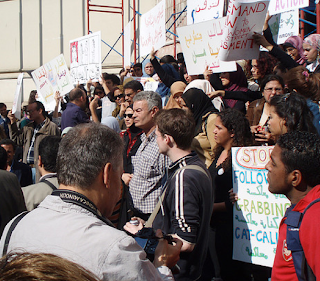 The press would not be silenced after all, and the rest of the world needed to know about Egypt’s shame and sexual violence.

Sexual harassment is pervasive throughout the Middle East but in Egypt it is severe. Perhaps it has gotten progressively worse since that fall EID day in 2006.  In the past, , Egyptians used to respect the women.  In fact the women of ancient Egypt were afforded the same or equal rights as men.  When the Greeks invaded Egypt in 332 BC, Egyptian women were afforded more rights than Greek women.  Today, if you are a woman living in Cairo, chances are you have been sexually harassed at some point.   It happens openly in the streets, on buses, in the workplace, in the doctor’s office.  It happens in front of the police, and the government is well aware of the problem but has done little to quell it.  It would happen more in the metro train if it wasn’t for the women-only trains.  And what is the glaring response by society as a whole — it is the woman’s fault for wearing something provocative, for being on the street at the wrong time, for walking alone —  Harassment happens to locals, ex-pats, even tourists.  As Iman Santori from the Fleeting Glimpse blog told me, “With regards to women rights, Egypt is 50 years behind the times.”  I’ll say that there’s no comparison — no other civilized nation in peacetime has seen sexual harassment so pervasive and so loosely enforced.  Egypt has hit rock bottom.

A survey by the Egyptian Centre for Women’s Rights showed that:
98% of foreign women visitors experienced sexual harassment

And sexual harassment by spouses can be brutally worse.  Men have been known to abuse their wives, some even burning and disfiguring them with seemingly impunity.

What is the root cause of this harassment?  Some say it is the repercussion of a failed state — with severe poverty, precipitous unemployment and uncontrolled population growth.  With many of the young men not working and without direction in life, they take their aggression upon the women.  The harassment ranges from catcalls to groping to indecent acts to rape.

Some Islamic fundamentalist point to the spread of conservative Islam from the Gulf states.  Several million Egyptians went to work in the Gulf States since the early 1970s.  When they returned, they brought back a more conservative view of women in the society that requires severely more restrictive roles for women and condemn women who step outside their roles.   Egypt has one of the most liberal dress codes for women in the Middle East.  Thus, many Egyptians claims that the verbal incitement is brought on by allegations that women are not modestly dressed.

I personally believe that although it’s important to understand the root causes, they serve as no excuse for this behavior.   It is the government’s lack of leadership that allowed the unemployment rates to skyrocket and it is the government that is not acting proactively and turning a blind eye to this very serious problem that is endemic in this deeply-rooted society.

The Big Screen has Taken Notice 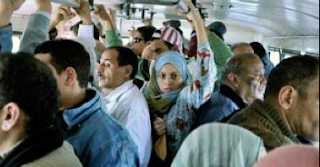 In the movie, “678”, a man is eyeing a middle-aged woman on a jam-packed bus and sliding his hands behind her.   Though fictional, the story is inspired by true accounts from women who had to ride bus 678 daily and become helpless victims of this lewd behavior.

Lately Things are Changing, but will it Last?


The Egyptian Center for Women’s Rights (ECWR) describes the problem as a social cancer and calls on the government to do something quickly.


Last year, the first man in Egyptian history was sentenced to jail and hard labor for groping filmmaker Noha Rushdi Saleh.  Sharif Gomaa drove a van besides her and grabbed her breasts so forcibly, she fell.

Unlike what millions of other women did before, Norah took the case to court and won.  The sentence was considered so harsh that the Egyptian Center for Women’s Rights (ECWR) stated that this act would  “restore confidence in the legal system’s ability to defend women subjected to such crimes.”

This is a huge step in the right direction, but will it be enough to stem the tide.  Will the government call on the police to crack down, take action and not just stand on the side and watch.

A new site has been created for women to report sexual harassment: 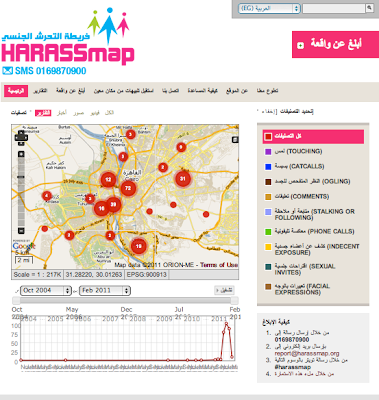 Women can now use SMS to report sexual harassment.  And they will get a response back to let them know what has been done about it.

Hopefully social media will do much to stamp out social injustice and sexual violence in Egypt.